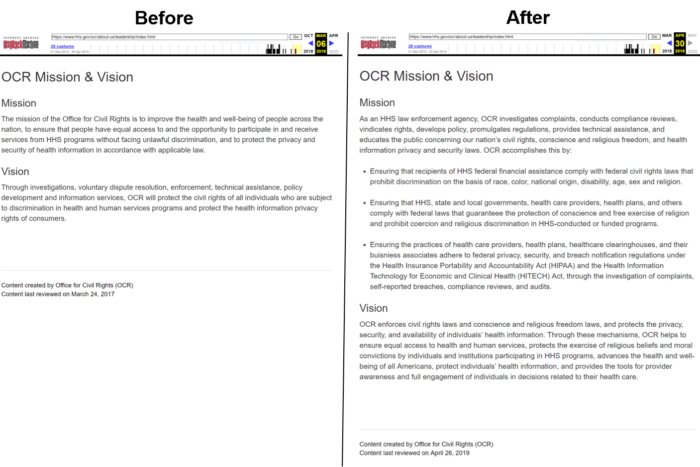 At the end of April 2019, the Department of Health and Human Services (HHS) overhauled the mission and vision statements listed on its Office for Civil Rights (OCR) website to emphasize OCR’s role in protecting “conscience and free exercise of religion.” The language introduced into OCR’s mission and vision statements appears to reflect new priorities of the office and foreshadows yet-to-be-released new rules that are expected to downplay LGBTQ rights in favor of religious freedoms.

OCR’s mission and vision statements had not changed on its website since at least the end of 2015 (see previous version from December 2015). As detailed in our new mini-report, the previous mission statement read:

“The mission of the Office for Civil Rights is to improve the health and well-being of people across the nation, to ensure that people have equal access to and the opportunity to participate in and receive services from HHS programs without facing unlawful discrimination, and to protect the privacy and security of health information in accordance with applicable law.”

Three bullet points follow, including one that states that OCR ensures that HHS-conducted or funded programs “comply with federal laws that guaranteee [sic] the protection of conscience and free exercise of religion and prohibit coercion and religious discrimination” (see version from after the change).

The Conscience and Religious Freedom Division was created over a year ago. In the January 2018 notice about its creation to the federal register, OCR changed its mission statement to the text that is now live on its website. The notice explains that the changes were made in accordance with an executive order from May 2017 that called on agencies to promote and respect free speech and religious liberty. The creation of a division does not necessarily fundamentally change the mission of the entire office, but it seems that the purpose and aims of the new division have now become central to the mission and vision of the whole office. Yet the new mission statement that reflects these aims was not posted to OCR’s public-facing website until over a year later.

Reporting by Politico on April 24 indicates that HHS is expected to release a new rule soon, which will grant protections for healthcare workers who refuse to provide services, such as abortion or transition-related care for transgender individuals, based on religious or moral objections. Politico’s reporting notes that advocates of transgender people expect this rule will fail to ensure adequate protections for the LGBTQ community. Ahead of the release of this rule, the stated mission of OCR on its website now incorporates language that the rule is expected the articulate.

The Office of Management and Budget (OMB) makes clear that an agency or office’s mission statement should clearly communicate its purpose and aims. The removal or alteration of any content on federal government websites might reflect the agenda of an administration, but a change to an office’s mission statement is the clearest way to demonstrate the administration’s priorities. While the overhaul of the OCR mission and vision statements page reflects the statements formally adopted by the office early last year and the budget proposal HHS submitted earlier this year, HHS has not explained why these website changes happened now and were so long in the making. Without one, the public is left to wonder if these changes were motivated by additional policy shifts that have occured, or if they perhaps foreshadow policy changes yet to come.

Note: This piece was updated on May 10, 2019 to include a link to the notice about the creation on the Conscience and Religious Freedom Division at OCR.