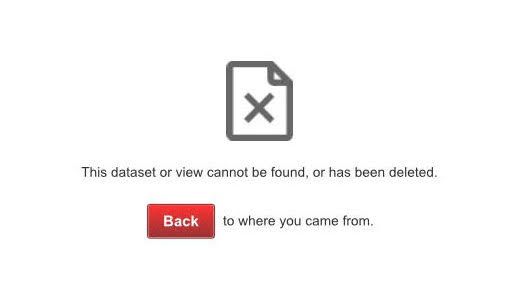 Prior to the inauguration of President Donald Trump, Sunlight joined other transparency advocates in expressing concern about the future of open government data in the United States. We highlighted the ways an administration could alter government data that fell short of outright removal, from defunding collection to limiting access to altering data sets. Taking open government data offline entirely was the most extreme action we anticipated.

Thankfully, that did not come to pass in 2017: despite widespread concern, we do not have evidence that data has been removed from federal websites after a year into the Trump presidency.

The singular exception we know of was the U.S. Department of Agriculture’s animal welfare datasets, documented below, which were taken down and then partially returned following public outcry and several lawsuits.

In March 2018, Congress passed an omnibus spending bill that included a report that specifically noted the removal, observing that the agency “is now posting heavily redacted inspection reports that make it difficult in certain cases for the public to understand the subject of the inspection, assess USDA’s subsequent actions, and to evaluate the effectiveness of its enforcement.”

The report noted that the takedown violated past congressional direction and directed restoration, stating “that the online searchable database should allow analysis and comparison of data and include all inspection reports, annual reports, and other documents related to enforcement of animal welfare laws. USDA is directed to comply with these requirements.”

“In reference to your inquiry, APHIS is reviewing the language and have no additional comments at this time,” said R. Andre Bell, an APHIS spokesman, in a prepared statement in answer to Sunlight’s questions.

We’ll update this tracker should the status of the data change.

What Sunlight and our allies at the Environmental Data & Governance Initiative (EDGI) have seen are substantial removals and overhauls of webpages, documents, research, and websites, reducing public access to public information across the federal webspace.

In 2018, we are continuing to monitor federal open data resources and websites in our Web Integrity Project.

If you see pages change or data go offline, please let us know.