My continuing joke about Ron Paul around the Sunlight office is that he would win in a landslide if all of his supporter’s MMORPG characters were allowed to vote. (That’s massively multiplayer online role playing game for those not hip to the slang.) All jokes aside, it appears that Paul’s supporters can sure raise a lot of money. In the 3rd Quarter of this year Ron Paul raised just over $5 million putting him slightly behind a former frontrunner John McCain, who raised $6 million. Paul has now set a goal of raising $12 million in the 4th Quarter and is using his Web site to show progress in achieving that goal.

Where Howard Dean had his bat Ron Paul has his Statue of Liberty. The Statue measures the amount raised so far, updating in real time, as Paul reaches his goal of $4 million in October. While Dean and others used these kinds of visuals tools to highlight fundraising during a key period this kind of fundraising transparency has never been done in real time over an entire quarter. Paul’s Web site also shows the names and hometowns of the donors. All of this data cries for one thing and one thing only: user generated content!

Paul’s Internet supporters instantly took all of this information and created their own site, RonPaulGraphs.com, which breaks down the fundraising into tons and tons of graphs. Here’s a couple of my favorites:

Patrick Ruffini went a step further and pulled all of the names and hometowns of donors into an Excel spreadsheet and proceeded to map the data. It looks like this: 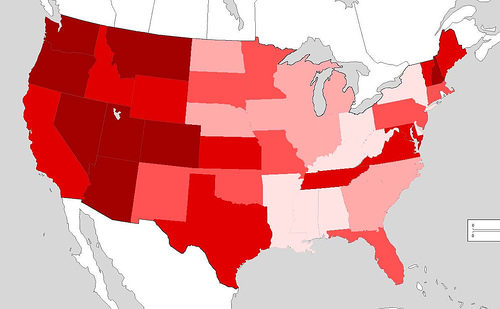 This is all really interesting stuff and it really shows how much of the Ron Paul campaign is being fueled through online innovation by citizens and not campaign staff. Paul’s fundraising transparency allows citizens, supporters and non-supporters alike, to engage in his campaign in new ways, see the real time graphs above, that more traditional campaigns do not.

Now imagine this kind of real time transparency for members of Congress and their fundraising. We could have MAPLight in real time. Or if lobbyists had to disclose their meetings in real time we could really map influence in . Ah, the benefits of real transparency.