Competition among bundlers is getting so competitive that fundraisers are getting their children to chip in. These aren’t grown children by the way; these are toddlers, babies, and prepubescent children without incomes – unless of course they’re working as cockney bootblacks (“Straight shine’s a nickel; super buff’s a dime!”). The Washington Post reported yesterday on this effort by bundling donors using their children and nieces and nephews as ways of funneling ever more money into the coffers of their favored candidate.

Such campaign donations from young children would almost certainly run afoul of campaign finance regulations, several campaign lawyers said. But as bundlers seek to raise higher and higher sums for presidential contenders this year, the number who are turning to checks from underage givers appears to be on the rise.

"It’s not difficult for a banker or a trial lawyer or a hedge fund manager to come up with $2,300, and they’re often left wanting to do more," said Massie Ritsch, a spokesman for the Center for Responsive Politics. "That’s when they look across the dinner table at their children and see an opportunity."

These children can be as young as two years old as is this Toddler for Obama:

Elrick Williams’s toddler niece Carlyn may be one of the youngest contributors to this year’s presidential campaign. The 2-year-old gave $2,300 to Sen. Barack Obama (D-Ill.).

So did her sister and brother, Imara, 13, and Ishmael, 9, and her cousins Chan and Alexis, both 13. Altogether, according to newly released campaign finance reports, the extended family of Williams, a wealthy Chicago financier, handed over nearly a dozen checks in March for the maximum allowed under federal law to Obama.

The Federal Election Commission does not explicitly set an age limit on donors however these donations will likely have to be returned. Obama’s campaign has already stated their intent to return the contributions from these children. Other campaigns will similarly have to figure out what to do with money donated from little kids.

The real problem here may lie with the parents who are going to have to explain to their kids that they gave their Christmas present to Barack Obama or Rudy Guiliani. For the non-voting under-10 population $2,300 could be used in much more useful ways, like buying this: 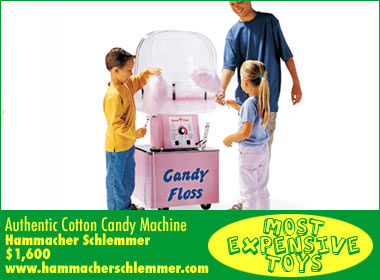 These kids are going to be unhappy to find out that not only did they miss out on this awesome cotton candy machine but that their Easter present is an audit from the FEC.