The food industry’s heavy lobbying over the past few years to reduce regulation and paperwork has turned into a “monkey’s paw” of sorts. As the AP says, “Be careful what you wish for; lest it may happen,” is certainly the lesson to be gleaned from the stupifying, and expected, blowback the food industry is receiving right now from their long lobbying effort. Here’s the run-down:

The food industry pressured the Bush administration to reduce paperwork that would have aided health investigators “quickly trace produce that sickens consumers.” The Bush administration also killed a plan to require electronic filing that would enable regulators and investigators to more rapidly search for the source of a food contamination outbreak in the case of an outbreak. The food industry spent millions on lobbying to stop these regulations, as evidenced in this chart from OpenSecrets.org: 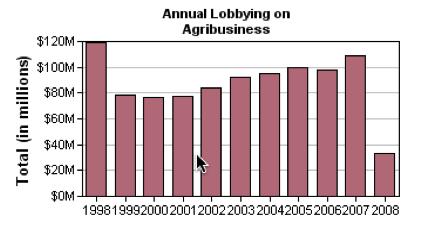 The food companies worried about the costliness of these proposals and labeled them “burdensome,” saying that they could disrupt the availability of consumers’ favorite foods.”

Now, according to the AP, during the current salmonella outbreak the food industry has lost $250 million, food supplies have been disrupted, and 1,300 people have gotten sick in 43 states and the District of Columbia. So, even without the regulations the food industry got their food disruption, consumers can’t eat tomatoes or jalapenos (which are chief ingredients in salsa), and a lot of people got to get sick.

The AP calls these “unintended consequences.” I’d say they are totally predictable and the public should take their scorn out on the food industry and their lobbyists for engaging in activities that have made eating more dangerous.

This whole episode reminds me of this scene from Kentucky Fried Movie, where a satirical science film posits a world without zinc oxide: