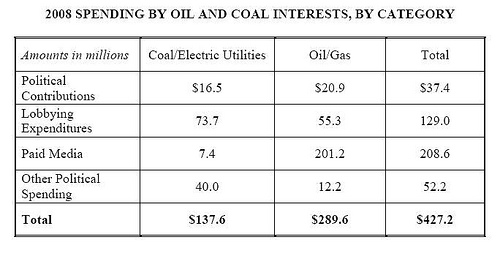 Public Campaign Action Fund just released a report on total influence spending by the big oil, coal, and electricity interests for the first half of this year. The report shows that from January 1 to June 30 these companies have put down nearly half a billion dollars on trying to influence members of Congress, officials in Washington, and, through advertising, you. The total amount, viewed above, consists of campaign contributions, lobbying expenses, paid advertising and media, and contributions to 527s and other organizations doing political work.

Check out the report. It’s an excellent examination of how industries use various channels to gain trust and influence.