From Teapot Dome to Ted Stevens, the oil and gas industry holds a special place in imagination of Americans. This industry is one that is deeply connected to numerous corruption scandals throughout American history. In the 1920s, the Ohio Gang bought the election for Warren Harding, installed their own Interior Secretary and Attorney General, and went about stealing public lands to drill for resources. In the late 1990s and early 2000s, Enron rigged the electricity market in California, helped elect a president, and funneled huge amounts of money into Republican coffers. And in 2008, Alaska’s senior senator, Ted Stevens, was indicted on charges related to his accepting gifts in exchange for seeking favors for the Alaskan oil company VECO.

Today, campaign contributions from the oil industry are ubiquitous in presidential and congressional races and oil lobbyists are paid millions in Washington. But in many ways, this is an old story. Instead of looking at oil and gas influence, why not look at the influence coming from new energy sources. If you’ve been watching television or reading the news, you’ve probably noticed the growth of stories surrounding alternative energy, from the explosion of wind turbine farms, Al Gore’s WE campaign, and T. Boone Picken’s plan. How does this nascent, yet exploding, industry measure up to the influence giants in Washington?

Alternative energy barely registers as a major player in Washington right now, but their stock is going up. Here’s a look at their lobbying expenses over the past decade:

These numbers go from $1.9 million in 1998 to $14.9 million, so far, in 2008. By comparison, the oil and gas industry has spent $55 million in 2008. Considering the proposed location of many alternative energy production sites, a Democratic win in November would certainly increase both lobbying and campaign contribution spending from this industry. The Wall Street Journal reported today on the proposed sale of offshore wind turbine leases, most of which will be situated in the Northeast, a solid Democratic stronghold. Just as the extraction industries that populate Republican states seek influence from and contribute to Republican candidates, the new alternative energy industry is already hitching its wagon to the Democrats.

This is already evident in campaign finance data. Democrats currently receive 73% of all alternative energy contributions. Democratic presidential candidate Barack Obama is the largest recipient of campaign funds from alternative energy companies. Other major recipients include committee chairs like Charles Rangel and Chris Dodd, and Democratic candidate for the House Michael Skelly, a former employee of Horizon Wind Energy.

MAPLight.org shows alternative energy companies supporting 14 bills in the 110th Congress, with one becoming law. That bill, H.R. 6, was universally opposed by oil and gas interests. MAPLight’s time line of contributions chart shows the intense spending by those in support and opposition to the bill as it moved through Congress. Green represents supporters, red represents opposition, and the hash marks at the bottom mark legislative actions: 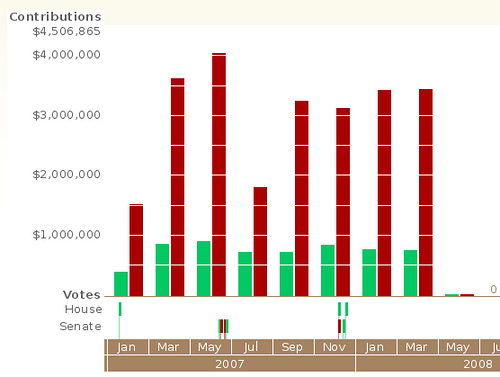