According to both the New York Times and the New York Post, Ways and Means Chairman Charles Rangel sporadically reported income and a mortgage on property that he owns in the Dominican Republic. Since purchasing the property in 1988, Rangel reported varying accounts of his property personal financial disclosures and failed to report any income on his state and federal tax returns. It is unclear as to whether he has run directly afoul of any law at the moment, but, yet again, here is another instance where the ambiguity in reporting on personal financial disclosures is in full display.

The New York Post ran up this handy graphic on the variations in disclosure reported by Rangel over the years: 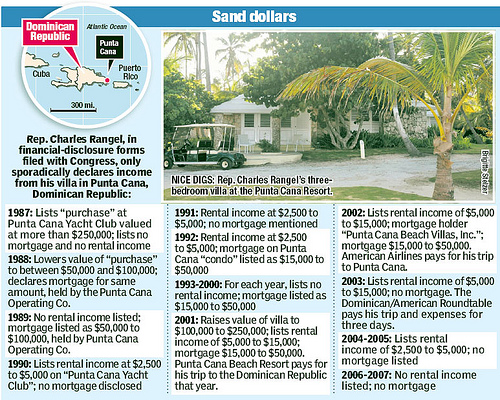 After numerous reports on disclosure failures and inappropriate fundraising practices, this doesn’t bode well for Rep. Rangel. Clearly he is having a bad year, and the digging by journalists will only continue.

Charles Rangel’s Personal Financial Disclosures (back to 1995) are available at Open Secrets.