Just like on Elm Street, Freddie killed bills in Congress. The Ted Stevens trial is set to wrap up today amidst cross examination of the Alaska senator. Lawmakers pressure AIG to stop lobbying. A look inside lawmaker insider trading. All of that in today’s news:

In 2005, when Republicans still ruled Washington, Freddie Mac deployed a stealth lobbying effort targeting 17 Republican senators in an effort to beat back a reform effort pushed by Sen. Chuck Hagel. The lobbying firm employed, DCI, never filed a lobbying disclosure form as they avoided direct contacts with lawmakers and staff. Instead, the firm, whose lobbying effort Freddie Mac chief Hollis McLoughlin wanted to stay on the down-low, deployed high-profile constituents – businessmen, trade associations, etc… – to push back against the regulation effort to their senators. Freddie Mac was very happy with DCI’s efforts as they kept 9 of the 17 targeted senators from signing a letter to then-Majority Leader Bill Frist asking that the bill be brought to the floor for a vote.

Sens. Dianne Feinstein and Mel Martinez responded to the appalling revelation that AIG is using taxpayer money to lobby against already enacted regulations by calling for the partially privatized insurer to stop its lobbying activities. AIG exists solely because of a $120 billion loan from the federal government, making the United States taxpayer the majority shareholder of the insurance giant.

Final fireworks are expected to fly as the fast moving ethics trial of Sen. Ted Stevens comes to a close today. Stevens is expected to face further cross examination today. The cross has already brought out the Incredible Hulk in Sen. Stevens as he showed his temper in court the other day. The defense attorneys are likely hoping that Stevens can better control himself. They don’t want to see him when he’s mad.

Open Secrets points to ProCon.org and their look into the issue of insider stock trading in Congress. Earlier this year, Rep. Brian Baird proposed the STOCK Act, which would make it illegal for lawmakers, staff, and executive branch officials to trade stocks with the benefit of nonpublic information obtained through the status of their official position. Another bill proposed by Rep. Baird would require “political intelligence” firms to publicly disclose their activities in the same way lobbyists do. In case you were wondering whether there is an actual insider trading positive effect on Congress’ stock sheets, check out this graph: 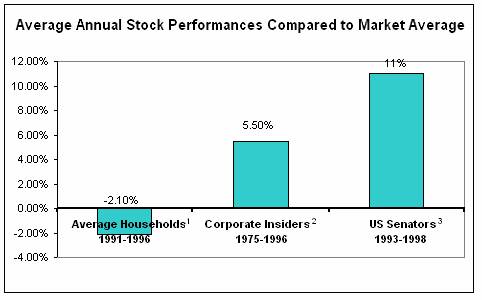