Everyone has their own thoughts and perceptions on what generally happens to bills as they pass through the legislative process. With the thousands of bills that are introduced every year, it is hard to get an overall sense of what is happening. During the last couple of months, I collected and processed data (from the Thomas Web site run by the Library of Congress) on each bill in the 110th session of Congress in order to understand what happened to all of them.

How the data was processed

I calculated the stages a bill has entered using a set of heuristics developed at the Labs. It is not perfect, but it does provide us with a sense of what happened to each bill. A bill’s death date and stage are calculated from the date of the last stage transition the bill makes before the end of the congressional session. Since there is an overlap in types of actions that happen in both the House and the Senate, I normalized the stage names so all bills can be compared with each other. Any stage that takes place at “home” such as “Home Committee Referral” takes place in the chamber of the bill’s introduction. Any stage that takes place at “other” such as “Other Committee Referral” takes place in the chamber it was not initially introduced in. Finally, please note that the “Passage” stage means the bill’s passage was voted on, it does not necessarily mean that the bill passed. You can read more about all of the stages and what each stage means here.

Let’s start with the basics

Where else do bills go to die?

We know that most bills die when referred to the home committee(s). But what other stages are lethal?

This flow map helps us visualize where bills go to die. The thickness of the line going into any stage corresponds to the number of bills that died in that stage.

What stages do bills enter?

Now that you have seen the final resting spots of bills, it may be nice to know how many bills enter each stage.

This graph depicts how many bills make it into each stage.

How long do bills live before they die?

Now that we have a sense of where bills go during the legislative process, let us also take a look at the timing. How much time does a bill spend alive before it finally dies?

How long do the bills that don’t make it as laws generally live? Suppose all bills in the 110th Congress started on the same day; this chart displays the number of bills that are still alive each day.

Still not satisfied? Let us take a look at a visualization that combines both timing and the stages bills enter to get the whole picture. 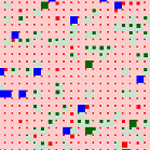 This visualization will help you have a better understanding as to what happens to each bill over the course of the session. Each bill is represented by a colored box whose size increases as it progresses through the legislative process. A green box means the bill is still alive, blue means the bill is a law, and red means the bill died. Warning: this Flash applet may lock up your browser while loading; this is normal.

To learn more about this project or play with the various features of the visualization please visit The Life and Death of Congressional Bills in the 110th Session.