They hold $1.3 trillion in assets and, chances are, you've never heard of them.

The Federal Home Loan Banks, or FHLBs, were created during the Depression, and are meant to ensure that if the economy were to tank, commercial banks would still have the money to issue home loans. A cooperative of 12 regional banks, the system works like this: banks, thrifts, credit unions and insurers (more than 8,100 across the country) become members and put up collateral; the FHLBs borrow money and lend it to th

em at a discount.

So where does the subsidy come in? Well, there's an implicit guarantee that if the home loan bank system were to fail, the government would bail it out, as it bailed out Fannie Mae and Freddie Mac last year. Because investors believe this, the FHLBs are able to borrow money at very low rates — and therein lies the subsidy.

The FHLBs provide a valuable service, especially to community banks that can't easily borrow money elsewhere. But on May 18, their regulator, the Federal Housing Finance Agency, had harsh words for some of the FHLBs. Here's what it had to say about the Seattle bank:

"Governance is unsatisfactory. [The bank's] financial condition is weakening… Earnings probably will not be sufficient to cover additional [losses] should [they] occur. Future losses could be substantial, and the FHLBank has no retained earnings with which to buffer additional losses."

The problem is that over the last few years, some of the FHLBs invested heavily in private mortgage-backed securities — the same types of investments that lost much of their value during the housing crisis. The FHLBs invested in very few securities backed by subprime loans — the so-called toxic assets we've heard so much about of late. Nonetheless, the values of some of the FHLB investments have plunged — and fast.

In the space of just two months, for example, the ratings of about $1.4 billion of the Seattle bank's investments were downgraded from AAA to junk status. That doesn't mean they're now worthless, but it certainly increases the chances that they won't recover their full value. What's more, the Seattle bank was only holding about $1.7 billion in capital on December 31, 2008; that capital is meant to protect it against losses.

The Seattle bank appears to be in the worst shape, but several of the FHLBs have run into similar problems, as we detailed earlier this week at Subsidyscope.com. 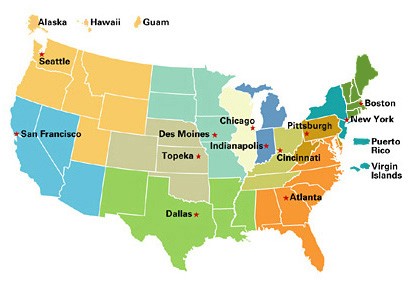 The 12 Federal Home Loan Banks, and the regions they cover.

In May, when they released their first quarter numbers, several of the FHLBs took substantial "unrealized losses," largely because of the private mortgage-backed securities. Because the banks believe these losses are temporary, they don't have to be recognized on their accounting statements.

And the Seattle FHLB has already exhausted many of the buffers it had to protect against future shortfalls. For example, at the end of 2008, it became the first Federal Home Loan Bank in the system's history to run out of retained earnings, an important safeguard against losses.

Home loan bank representatives say the setbacks are merely temporary because they intend to hold the securities to maturity. By then, they predict, the economy will have improved and these holdings will have recovered their value.

Besides, spokespeople say, the FHLB system as a whole has enough capital to recover from any future losses, even if a few of the banks were to come up short.

In an e-mail, a spokesperson for the Seattle bank said the downgraded securities are "still performing," and that the unrealized losses are "driven by depressed market prices, rather than actual economics."

Still, some analysts have concerns. "[T]he kind of numbers you're talking about would suggest a significant amount of stress," said Mark Flannery, professor of

finance at the University of Florida, Gainesville, and co-author of the 2006 report, "The Federal Home Loan Bank System: The "Other" Housing GSE." 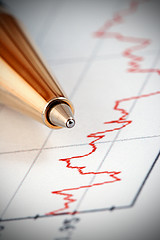 Private mortgage-backed securities are much riskier, however. In January, Moody's was already raising concerns about the FHLBs' capital levels, based on data from October 2008. It reported that in the worst-case scenario, if the FHLBs' securities didn't regain their value, eight of the 12 banks would fail to meet their capital requirements, raising risks for taxpayers. Further complicating the picture, the Financial Accounting Standards Board loosened the accounting rules that govern the home loan banks. In the case of the Seattle bank, the net income on its books as of March 31 would have been $823 million lowerwithout the rule change.

Regardless, Timothy Yeager, a professor of finance at the University of Arkansas and a former economist at the Federal Reserve Bank of St. Louis, thinks the home loan banks will remain strong. "They have the means to straighten this out, and in the end, they'll be fine," he said. "They'll get their capital levels back over time."

But some charge that a few of the FHLBs have endangered their mission to make homeownership affordable by making such risky investments. "The Federal Home Loan Banks received so many benefits from government that one would have expected them to manage their affairs more prudently," said Tom Stanton, fellow at the Center for the Study of American Government at Johns Hopkins University and a specialist in government-sponsored enterprises like the FHLBs. "Given their low cost of funds and the agency debt markets, they didn't need to take on risky assets in order to thrive and carry out their public purposes."