It comes as no surprise that Indiana Democrat Pete Visclosky’s favorite word to say in Congress is “Indiana.” While staying out of the spotlight in Washington, he has been a champion for his Northwestern Indiana congressional district, bringing home millions of federal dollars to create jobs and win fans. Since the decline in manufacturing, new jobs have become essential for this Rult Belt region and Visclosky, from his position on the House Appropriations Committee, has sought to get as big a piece of the federal pie as he can for his constituents.

This hard work bringing home federal dollars has made Visclosky a national news name as his connection to a lobbying firm, the PMA Group, which represented many of the recipients of federal money earmarked by the congressman, has brought him under investigation by the FBI. In the past two weeks, Visclosky’s offices and campaign committess have been subpoenaed and he has reliquished control of the Energy & Water Appropriations Subcommittee to Rep. Ed Pastor.

All of this is due to the connection between campaign contributions flowing from the PMA Group and their clients to Visclosky’s campaigns and the millions of dollars in earmarks to PMA Group clients that Visclosky secured in his post on the powerful House Appropriations Committee. After studying campaign contribution data for 1998-2008 (compiled by the Center for Responsive Politics) and earmark data for FY2008 and FY2009 (from both Taxpayers for Common Sense and Legistorm), the connection between those PMA Group clients that contributed money to Visclosky’s campaigns and the earmarks they received is clearly evident. The visualization below — created by our terrific designer Kerry Mitchell — shows how connected the earmarks are to the receipt of campaign contributions. Click on the image for a larger version: 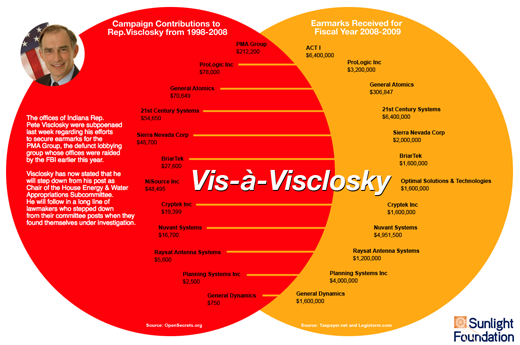