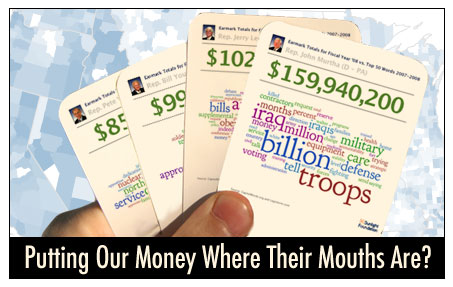 What do top earmarkers talk about in Congress? Does our money go where their mouths are?

Three of these lawmakers — Reps. Lewis, Murtha and Visclosky — are either under federal investigation or have been mentioned in connection to an investigation in relation to their earmarking practices.

Check out the following word cloud visualization to see what these earmarking lawmakers are talking about. Below the visualization is a list of the Appropriations committee assignment for the nine lawmakers on the committee.

Note: Earmark data comes via Taxpayer.net. Word data comes from CapitolWords.org. Only House lawmakers were used due to less than stellar earmark disclosure by the Senate. And thanks again to Kerry Mitchell for the visuals.