An analysis using Capitol Words comparing the words spoken by Speaker of the House Nancy Pelosi and Republican Minority Leader John Boehner in 2008 shows that the two issues receiving the most discussion by both parties in the 110th Congress were the debate over climate change legislation and off-shore drilling and the debate over the collapse of the financial sector and the ensuing recession. 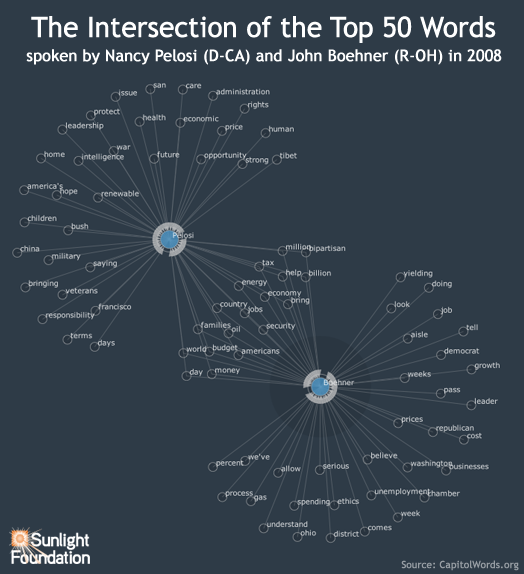 Of the top fifty words spoken by both party leaders, there is overlap for only eighteen words. These eighteen words include five of the top thirty words spoken during the entire 110th Congress: Energy, Security, Country, Tax, and Oil. All of these words featured prominently in the debate over energy legislation during the summer months in 2008. Other words that overlapped include Economy, Budget, Jobs, Million and Billion, all words spoken during the September-October debate over the federal bailout of the financial services industry. 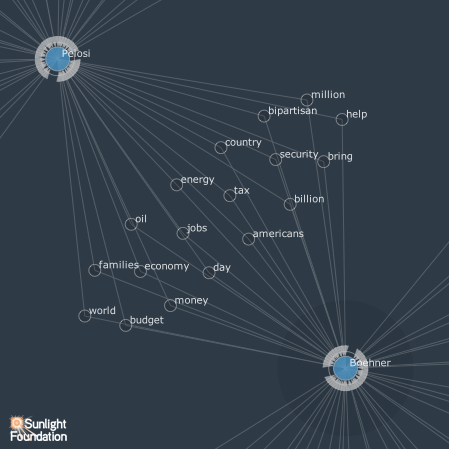 Also important are the many words that do not overlap. These show the Speaker’s support for the Democratic presidential candidate Barack Obama and the preview of congressional Republicans 2009 complaints about deficits and spending. The natural oppositional nature of being in the minority is also evident in the kinds of words used by Leader Boehner.

Speaker Pelosi used many words that imitated the language of Barack Obama: Future, Hope, and Leadership. These were staples of the Democratic presidential candidate’s campaign. Leader Boehner was, at the same time, showing the combative nature of being in the minority, particularly during a difficult election year. Boehner’s words included Democrat, Washington, and Ethics. These are clearly words used to attack the majority. Speaker Pelosi did not use the word Republican in her top fifty words.

The Republican Leader was also focused on traditional Republican policies of low spending with the words Spending, Prices, Cost and Growth. This definitely previewed the lines of argument coming from the minority in the current Congress.

One other interesting tidbit is the use of words that seem to stress similar ideas but from different angles. For example, Speaker Pelosi uses the word Opportunity while Leader Boehner uses the word Unemployment.

These infographics were created by Kerry Mitchell using data from the CapitolWords.org API and were visualized in Nodebox http://nodebox.net using the “graph” library.

Tell me what you see here in the comments.