This post exists in the service of taking government data and showing what you can do with it.

Yesterday, the Senate Judiciary Committee held a hearing on the National Criminal Justice Commission Act (S. 714), a bill proposed by Sen. Jim Webb to create a commission to study and make recommendations on the reform of our nation’s criminal justice laws and practices. The bill is supported by 28 senators, none of whom hail from the three states with the highest incarceration rates.

Using data extracted from a .csv file from the Bureau of Justice Statistics (this data is not yet on Data.gov and really ought to be, even though I could download it very easily), state-by-state incarceration rates were put into a map of the United States by our designer Kerry: 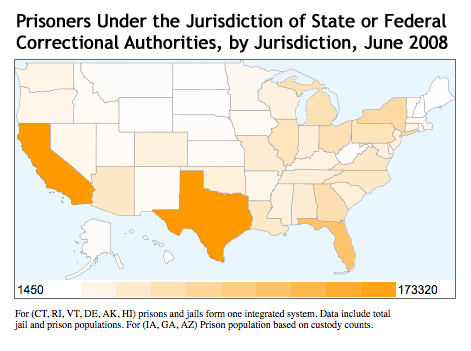 The top three states in prison incarceration are California, Texas, and Florida. None of the senators from these three states currently support the National Criminal Justice Commission Act. The existence of a large prison population in a state may show that the endeavor of incarceration holds strong political heft. This is particularly the case with private prisons, which, as private enterprise, have considerable reason to get involved in the political process to preserve their profit. A look at private prisons and the location of them would help provide an even deeper understanding of political considerations for senators.

Below is a list of senators and the prison population of their state and their support for the bill.