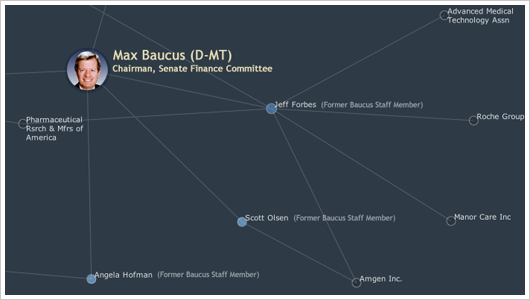 As the chair of the Senate Finance Committee, Sen. Max Baucus is at the center of the congressional effort to craft health care reform legislation, a top priority of President Barack Obama. The Baucus-headed Finance Committee has been singled out by advocates and news organizations as the toughest obstacle for the President’s health care priorities. Containing more moderate and conservative members may not be the only reason. The committee is packed with lawmakers who have close ties to the health care and insurance industries, receiving large campaign contributions as their former staffers turn around to lobby for the very interests whose issues — in this case health care — they previously worked on. Baucus, as chair, stands out in particular.

Lobbying disclosure filings for the first quarter of 2009 reveal that five of Baucus’ former staffers currently work for a total of twenty-seven different organizations that are either in the health care or insurance sector or have a noted interest in the outcome. The organizations represented include some of the top lobbying organizations in the health sector: Pharmaceutical Manufacturers and Researchers of America (PhRMA), America’s Health Insurance Plans (AHIP), Amgen, and GE Health Care.

The accompanying visualization shows the connections from Baucus to his staffers-turned-lobbyists to their health care sector clients, which, in some cases, overlap. Most of the organizations are directly involved in the health care or insurance industries. A couple, the Business Roundtable and Wal-Mart, may seem to fall outside of the realm of health care, however both are playing key roles. The Business Roundatble is lobbying heavily on the issue and Wal-Mart is a big seller of prescription medications and has a large stake in the outcome.

All data comes from OpenSecrets.org.