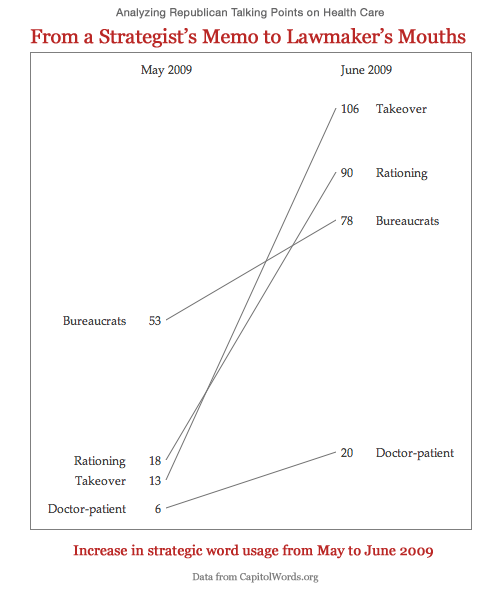 Back in May, in anticipation of the coming health care debate, Republican pollster, strategist and word smith Frank Luntz penned a memo (PDF) detailing key words and language to use to oppose the Democrats health care reform efforts. The memo stressed words like “rationing,” “doctor-patient,” “government takeover” and “bureaucrats.” After putting these words through the Capitol Words search engine, it’s pretty clear that Republicans are listening to Luntz’ advice.

Over the past month, as the health care debate has really gotten off the ground, the use of these words in the Congressional Record has skyrocketed. See the numbers below:

“Rationing” goes from 18 uses in May to 90 uses in June. This marks the highest level of use for the word “rationing” in the Capitol Words database.

“Doctor-patient” goes from 6 uses in May to 20 in June. This marks the highest level of use for the word “doctor-patient” in the Capitol Words database.

“Takeover” goes from 13 uses in May to 106 in June. This marks the highest level of use for the word “takeover” in the Capitol Words database.

“Bureaucrats” goes from 53 uses in May to 78 uses in June. This marks the highest level of use for the word “bureaucrats” in the Capitol Words database.

All of these four terms are at their respective highest use points from 2001-2009. It can’t be a coincidence that these words rise after the release of the Luntz memo. And if you look at the partisan breakdown of word use in the Congressional Record you’ll find that these words are used almost exclusively by Republicans.

The word “rationing” is exemplary of this partisan split. The only Democrats to use the word are Sens. Dick Durbin and Patty Murray. However, Durbin uses the word in a speech denouncing the Luntz memo and Murray uses it in denouncing the use of the word. All other uses come from a variety of Republicans in both the House and the Senate.

“Doctor-patient” has a similar split with only three Democrats using the word. All other uses come from Republicans, largley from the Senate and more specifically the Senate Republican leadership.

The use of “takeover” is equally split along partisan lines. The Democrats using the word, Sens. Sherrod Brown, Byron Dorgan, and Murray, all use the word to criticize the use of it by Republicans with Sen. Murray explicitly criticizing the Luntz memo. The preponderance of use for “takeover,” like the other words, comes from Republicans.

“Bureaucrats” falls along the same lines as the other three words. Democrats using the word, which is rare, use it to do one of two things: attack the use of it (Sen. Jeff Merkley directly attacks the Luntz memo) or use it in reference to bureaucrats in the health insurance industry. Republicans dominate this word, as they do the other three Luntz memo words.

In some cases, all of these words come together in one sentence, highlighting the strategy recommended by Luntz in his memo. These are two of the best examples (with my own highlighting):

Rep. John Boehner: “The forthcoming plan from Democratic leaders will make health care more expensive, limit treatments, ration care, and put bureaucrats in charge of medical decisions rather than patients and doctors. That amounts to a government takeover of health care, and it will hurt, rather than help, middle-class families across our country.”

Winning the battle over health care reform requires framing the debate by using key words to influence public opinion. Luntz’ memo provides a view into how Republicans believe they can succeed at opposing reform efforts. Capitol Words helps us see the influence of that memo on the actual language of Republicans.