Despite his withdrawal from consideration for the Health and Human Services (HHS) cabinet position, former Senate Majority Leader Tom Daschle remains a powerful voice in the health care debate. The New York Times reported over the weekend that Daschle still commands the ear of those at the White House and may be acting as a shadow HHS Secretary in health care discussions. But behind those Lafont Providence glasses and the genial Great Plains demeanor lies a list of health care clients that exposes a serious conflict of interest as the former senator attempts to influence policy.

Two months ago, I wrote a post on the health care clients of Daschle’s law firm, Alston & Bird. The list includes many powerful players who have organized on both sides of the health reform debate. Perhaps the most important client is UnitedHealth Corp., a powerful insurance company that has opposed the most controversial provision in the debate, the public option. The Times article notes this conflict:

Now the White House and Senate Democratic leaders appear to be moving toward a blueprint for overhauling the health system, centered on nonprofit insurance cooperatives, that Mr. Daschle began promoting two months ago as a politically feasible alternative to a more muscular government-run insurance plan.

It is an idea that happens to dovetail with the interests of many Alston & Bird clients, like the insurance giant UnitedHealth and the Tennessee Hospital Association. And it is drawing angry cries of accommodation from more liberal House Democrats bent on including a public insurance plan. 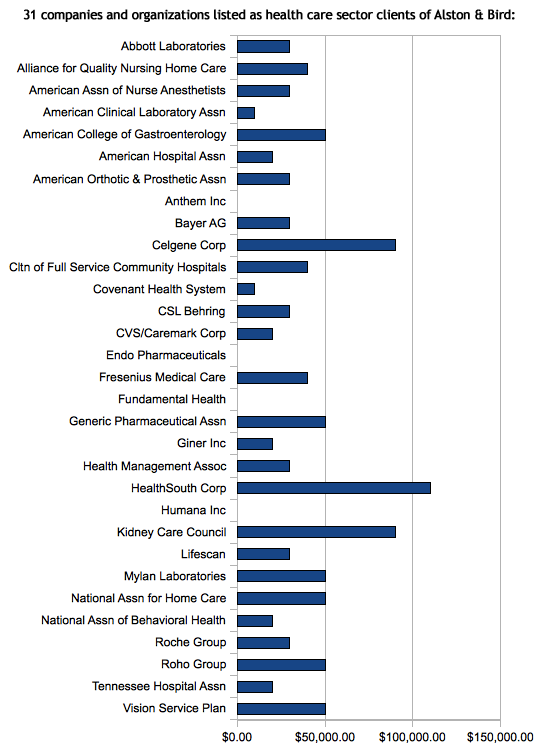