There was also a very similar runner-up: Disasters Map. It allows users to not only to browse a map of earthquakes and storms but also to search Twitter around the areas hit by these natural disasters. Unlike QuakeSpotter, the site features the ability to browse by date and see how many times members of congress have mentioned the word “storm” or “earthquake.” 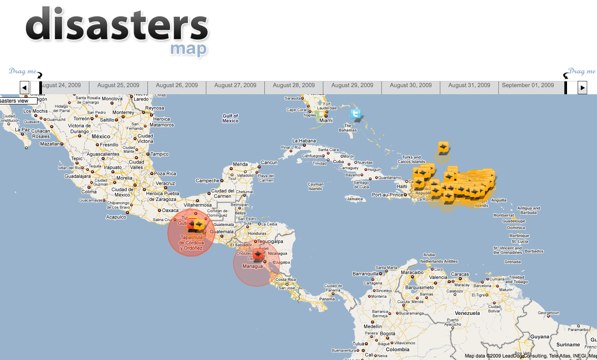 Another one that didn’t quite make the honorable mention list is Quake Map. I thought this was a pretty novel application. It takes USGS data, allows you to merge it with your Facebook friends and then sends you Facebook notifications when one of your friends has been involved in an Earthquake. It’d be great if this app, too, was made more compatible with other disasters other than earthquakes- storms and fires, for instance, could also apply to the map to yield a more useful tool.

Both apps are great, and though only Disasters Map got the honorable-mention prize, these kids of apps demonstrate how government is a platform that can be built on top of for developers of any kind.