Since the end of July the Senate Finance Committee has been the focus of health care reform discussions. More specifically, the bipartisan “Gang of Six,” organized by Sen. Max Baucus, has been working to formulate a health care compromise that some Republicans may be able to support. An analysis of voting agreement between the six senators involved in these discussions shows the likely futility of this effort as only one Republican shares similar voting patterns with the majority Democrats. 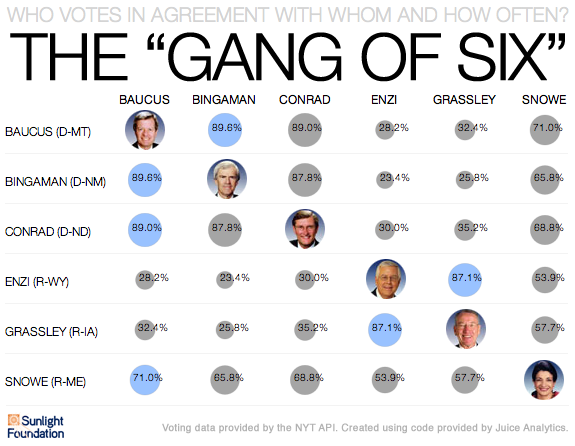 Sen. Olympia Snowe (subject of a voting agreement analysis here) is the only Republican in the “Gang of Six” with a substantial voting agreement with the Democrats involved. Snowe’s agreement with the three Democrats, Sens. Baucus, Jeff Bingaman and Kent Conrad, is above 60% for all three, but below 60% for the other two Republicans, Sens. Mike Enzi and Chuck Grassley. This continues to underline the key role that Snowe can play in the health care reform plan’s final structure.

Recently, Democrats have focused on only attracting one or two Republicans, Snowe being the highest target, to vote for the bill rather than pursuing the strategy that Baucus sought with the “Gang of Six” talks. These voting agreement numbers show that, aside from Sen. Snowe, the “Gang of Six” is intensely polarized in their voting patterns. The likelihood of bipartisan compromise was unlikely from the start of this process.

The above graphic was created using the New York Times Congress API and based on Nodebox code from Juice Analytics.