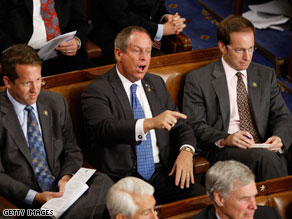 Rob Miller, a Marine and congressional candidate in South Carolina’s 2nd district, probably didn’t expect to become an overnight star while he was watching the President give a speech to a joint session of Congress on health care reform. Then came Rep. Joe Wilson’s rebel yell, “You lie!” Miller is Wilson’s Democratic opponent in 2010 and lost a relatively close election to Wilson in 2008 (54%-46%). The money started pouring in almost immediately. Within a few hours, Miller raised over $100,000. Two days after Wilson’s outburst, Miller has raked in over $750,000 (while writing he has crept to almost $800,000), likely making him one of the better funded Democrats running for a House seat in 2010.

Nearly all of this money is being raised through the site ActBlue, a fundraising portal set up to allow individuals to raise money for Democratic candidates themselves. One of the best features of the site is its transparency. The site updates as new contributions come in, showing the total on the candidate’s page — or on a fundraising group’s page (like this group raising money for Miller). All of this has been written before, but I wanted to highlight one feature of this transparency: real time disclosure.

Current campaign finance laws require only quarterly disclosures of campaign contributions. The unforseen money bomb for Rob Miller exposes a problem with the limited system of quarterly disclosures for candidates trying to increase enthusiasm for and attract small donor money to their campaigns. The transparent nature of ActBlue allows for the snowballing effect we’ve seen over the past few days. It’s a lot more rewarding for small donors to contribute when they can see the group results of their actions. Many campaigns have used transparent fundraising mechanisms at times, the Howard Dean bat and the Ron Paul money bomb are two obvious and innovative examples. By the 2008 campaign this was a pretty standard tactic of presidential candidates; both Barack Obama and Hillary Clinton used this gimic many times in the Democratic primary.

But why shouldn’t this just be the norm? Campaign contributions are viewed by the law as a form of speech. If we see real time disclosure of campaign funding help increase individual desire to contribute, isn’t this a boon for speech and democratic participation? Donating to a campaign is a step above voting, in terms of participation, and can lead to further political actions like volunteering or even getting involved in local politics. Campaigns could simply forward their contributions on to the Federal Election Commission (FEC) in a timely, maybe not immediate, manner and the FEC could report the contributions in real time. This could increase transparency, campaign enthusiasm and small donor power across the board.

Right now, in the Miller/Wilson example we are seeing how the transparency of real time contributions has helped one candidate over another. Since Wilson’s comment, the media has focused on his opponents rapid fundraising as they can see the numbers pour in over ActBlue. It took two days for Wilson to release a number on the amount he had raised, $200,000, in the wake of his outburst. A system where real time contributions could be viewed side-by-side may have helped increase contributions to Wilson. Who doesn’t like a little healthy competition?

This is certainly a different argument for disclosure than is usually made, which is that money plays an influencing role in politics and disclosure of contributions is required to allow the public and an enforcement body to hold candidates accountable. This is an important argument and is certainly another reason for real time disclosure of contributions, but as I’ve stated above disclosure can also play a role in invigorating political activity. Unfortunately, it is the influence argument as the backbone of campaign disclosure that begins to complicate real time disclosure.

One requirement in campaign finance disclosure is the disclosure of names and employment, a key to gleaning the influence of interests and powerful people have with our elected representatives. In Buckley v. Valeo the Supreme Court upheld the disclosure of campaign contributions due to the need to avert possible problems of corruption and influence in elections and determined a minimum threshold for disclosure. It was determined by the court that contributions of a certain value were more likely to cause undue influence or potential corruption than smaller donations. These small donors would be spared disclosure to protect their anonymity as the size of their donation could not reasonably be seen to influence a candidate. Thus we have a system where small donations — those who contributed less than $250 — do not need to be disclosed to the FEC with the attendent name, employment and other categories for each individual donor.

How would this work out in a system of real time disclosure? Should we do away with minimum disclosure threshold? There were numerous problems with small donors during the 2008 elections, fraudulent donations and more, that could lead to a reasonable need for small donor disclosure. But would this work counter to the benefits of real time disclosure (increased participation, competition and speech) by scaring off individual donors afraid of identifying themselves? I’m not sure what the answer is to that question. If you care let me know what you think about it in the comments.

From the classic perspective of influence in politics, real time disclosure is imperative to shine the light on contributions as the pour into Congress during bill markups, committee hearings and votes. Similarly, real time disclosure would aid the need for increased competition and speech in our politics. Thanks to Rob Miller and Joe Wilson and ActBlue for showing us that.