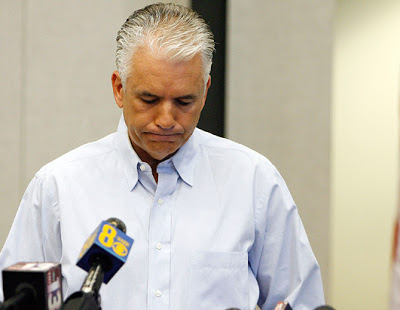 Earlier this year, Sen. John Ensign, a rising star in the Republican party, revealed that he had had an affair with the wife of a top aide and close friend. Unlike the more famous affair revelation of South Carolina Gov. Mark Sanford, Ensign’s affair wasn’t a tale of true love, but a story about corrupt politicians paying out hush money.

The New York Times reports today that Ensign was deeply involved in providing money to his mistress and her husband. Ensign also helped the former aide and cuckolded husband, Douglas Hampton, get a job as a lobbyist and persuaded campaign contributors to hire Hampton. According to the Times, Ensign and Hampton then conspired to break lobbying laws that preclude a former staffer from lobbying their previous employer for one year. Ensign proceeded to connect Hampton to policy makers and work to fulfill the requests of Hampton’s clients.

Here’s the key piece — if one piece can be picked out — of the Times article:

Mr. Hampton said he and Mr. Ensign were aware of the lobbying restriction but chose to ignore it. He recounted how the senator helped him find clients and ticked off several steps Mr. Ensign took to assist them with their agendas in Washington, activities confirmed by federal officials and executives with the businesses.

“The only way the clients could get what John was essentially promising them — which was access — was if I still had a way to work with his office,” Mr. Hampton said. “And John knew that.” … Mr. Hampton, who believed that Mr. Ensign’s help with his clients was crucial to his success, admitted he had ignored the restrictions. He said that it was November Inc.’s responsibility to register him as a lobbyist, but he added that he did not insist the company do so because it would have made obvious that he was making inappropriate contacts on Capitol Hill. As for violating the one-year ban, he said he did so at Mr. Ensign’s direction.

This will, in all likelihood, lead to an ethics investigation, which could defer to a Justice Department investigation if one were to be launched. All in all, it looks pretty bad for the Nevada senator once considered a potential 2012 presidential contender.

Support from leadership already appears weak. Minority Leader Mitch McConnell said the last thing Ensign might want to hear when asked about the Times article, “Sen. Ensign continues to serve.” (This is exactly what Robert Gibbs had to say about Climate Czar Van Jones before he was canned.)