Last week, the Senate Environment and Public Works Committee reported out a bill to address climate change by a 10-1 vote. The lone no vote came from Montana Senator Max Baucus, who as chairman of the Senate Finance Committee will have his opportunity to craft his own climate bill. Baucus will likely have a lot of input coming in from outside his office as twelve of his former staffers, including four former chiefs of staff, work as lobbyists for organizations with an explicit interest in climate legislation. 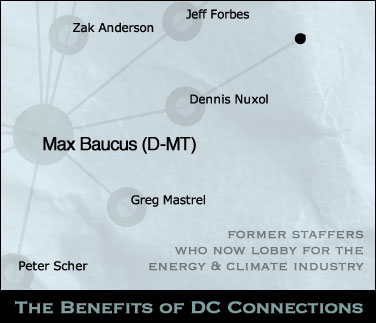 These twelve lobbyists represent a large cross-section of industries, from airlines to railroads and oil producers to solar energy companies. (You can view them in a relationship map here.) The diversity of organizations also brings a diversity in positions on the underlying climate bill. Many of the organizations represented by former staffers of Baucus are generally supportive of a climate bill, but are seeking certain provisions to be included or not removed during the committee process. Others are engaged in outward opposition.

This split is noticeable when comparing the clients of two former staffers turned lobbyists. Former Baucus chief of staff David Castagnetti represents a large number organizations opposed to the legislation including the American Petroleum Institute, the Business Roundtable, the Air Transport Association of America and Koch Industries. On the other end is former Policy Counsel J. Curtis Rich, who represents a number of biofuel, bioenergy and alternative energy groups that are generally supportive of climate legislation.

The other former Baucus staffers turned lobbyists represent a range of organizations, many of whom are seeking specific provisions in a climate bill. These organizations include American Farmland Trust, National Biodiesel Board and the Renewable Fuels Association seeking exclusions from carbon regulation for farms and biofuel producers, like corn farmers. Others range from the outwardly supportive Sapphire Energy, whose chief executive spoke at the introduction of the Kerry-Boxer bill, to the outwardly opposed Exxon Mobil.

Baucus will have time to hear from all of the organizations and lobbyists with an interest in climate legislation when his Senate Finance Committee takes up the issue. The Finance Committee bill will attract intense attention and these twelve lobbyists have an inside track on getting their clients interests heard before the committee chairman. This will give a leg up to a lot of organizations with a desire to support the legislation, but are looking for the inclusion, or exclusion, of particular language in any bill.

The biofuel industry is one with a lot to gain in potential legislation and is heavily represented by former Baucus staffers. The industry is seeking particular policies from the Senate as they increase their lobbying effort. One such key policy to the industry is how the government counts indirect land use emissions, like deforestation, in the carbon calculation for biofuels and bioenergy. The House bill requires a five-year wait period to allow for scientific studies to determine whether indirect land use emissions lead biofuel production to have a higher carbon emission level. The Kerry-Boxer bill currently has no language on indirect land use and the industry is determined to include a provision similar to the House bill in the final bill language.

The Environment and Public Works Committee vote came after the minority Republicans boycotted the mark-up session. The committee is not allowed to commence mark-up without at least two minority committee members in attendance and, thus, voted the bill out of committee without amending the bill in mark-up.

Baucus voiced opposition to the inability of members to mark-up the bill and stated that he did not support the bill’s goal of reducing greenhouse gas emissions by 20% by 2020, a more stringent requirement than the House bill that was approved by the lower chamber in June. Baucus instead supports the House bill’s goal of a 17% reduction by 2020. “Unfortunately, these concerns have not been resolved, so I am not able to vote for this legislation,” Baucus said.

Below is the full table of former Baucus staffers turned energy and climate lobbyists: