At the end of last year, the White House dropped a new pile of visitor log records into the public, online record. Upon returning in January from a near month long vacation I decided to take a look at these new records. One story that I wanted some more information on was the oft-reported on deal between the White House and the pharmaceutical companies. I started looking up meetings for pharmaceutical executives, PhRMA lobbyist Billy Tauzin and so on. After a bit of searching and reading some articles from last summer two things dawned on me: 1) There was no singular resource that brought together all of the reporting and all of the data in one place and 2) No one reporting on this deal seemed to know that Sen. Max Baucus posts his schedule online.

The second point is what really crystallized the need to write this piece for me. Last summer, I dug into Baucus’ publicly available schedule (which wouldn’t be available if it weren’t for Sunlight’s efforts) examining his meetings with leaders in the health care industry. When I was looking at the White House Visitor Logs, a lot of the dates looked familiar. That’s because they matched up precisely with dates in Baucus’ schedule with the same actors meeting at the White House and with Baucus. Data that was available online all this time showed how closely the White House and pharmaceutical companies were coordinating with Baucus’ office in crafting a health care reform bill. 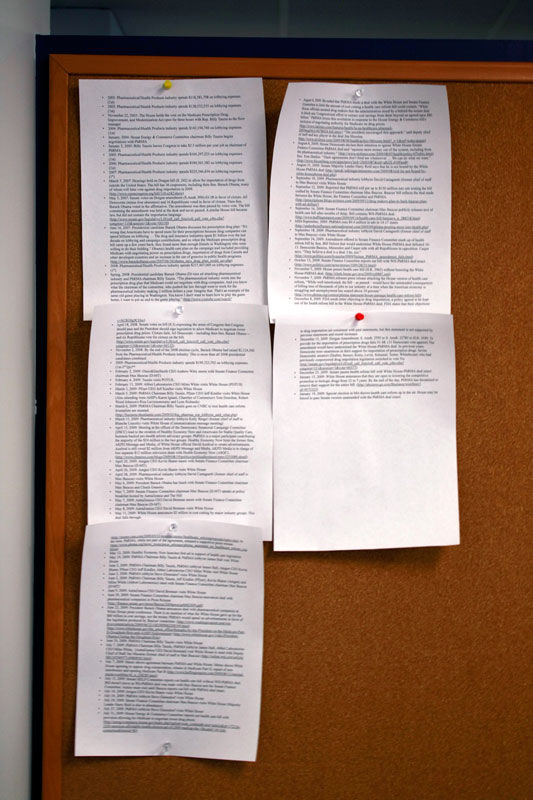 In researching this project I pulled every important meeting in White House Visitor Logs and Baucus’ schedule, found the most relevant and revealing articles already written, looked up voting records on the Senate’s web site and dug into the lobbying team hired by PhRMA using the databases of the Center for Responsive Politics (CRP). The meetings and key moments (votes, revelations) written in previous articles became a five-page time-line, which was later whittled down to include just the major meetings with the White House and Baucus’ office. (Image to the right is of the original time-line.)

One of the statistics in the piece took almost a full day to research. In looking through lobbying disclosure records on CRP’s web site I counted 48 outside lobbying firms hired by PhRMA in 2009. These 48 lobbying firms, plus PhRMA’s in-house operation, employed 165 lobbyists registered to lobby for PhRMA. Those are some extraordinary numbers, but it doesn’t tell the whole story of influence. Having spent a lot of the past year digging into former staffers turned lobbyists I figured that PhRMA would likely be employing a large number of former government officials and employees. (For previous revolving door research see: Max Baucus Health Care Lobbyist Complex, Senate Finance Committee Lobbyist Complex [Dems, GOP], Blanche Lincoln Health Care Lobbyist Complex, Max Baucus Energy & Climate Lobbyist Complex.)

Digging into 165 lobbyist profiles is not the most fun thing in the world. CRP hosts a revolving door database that lists former government positions held by lobbyists. I had to create a spreadsheet for 165 lobbyists by clicking on each individual profile and determining, based on CRP’s information, whether they were a former government employee and where they worked. In each case where no revolving door profile existed I turned to Google and the web sites of the respective lobbying firm for lobbyist profiles. Many times this helped identify lobbyists with past government experience who were not listed in CRP’s database. In the end, it turned out the 137 of the 165 lobbyists hired by PhRMA had previous government experience, the majority of whom worked in Congress. Below is a Google spreadsheet of some of the more pertinent former congressional staffers turned lobbyists for PhRMA:

Aside from telling a story that is vital to understanding the health care reform effort and the reasons that led to such a drawn out process, this piece sought to take information that is publicly available—and online—and provide context to that information. When we talk about government transparency we often discuss the release of raw data sets. Those data sets are meaningless if they aren’t taken and placed into context for the wider public. If the White House Visitor Logs just sat in a database they would provide no benefit to the American people. Someone has to go in and pick them apart and show the relevant information in the context of a story that people can understand.

There was also a lot of support from other Sunlighters in making the totality of this piece. The video included was created by Noah Kunin; the visual timeline was created by Alison Kim; Avelino Maestas helped fact-check the article; Bill Allison and Anupama Narayanswamy edited the piece.