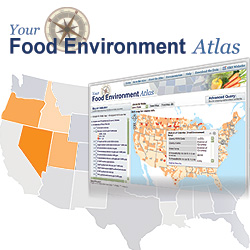 As part of the First Lady’s campaign to combat childhood obesity, the Department of Agriculture in February launched the Your Food Environment Atlas – an online mapping tool of the nation’s access to food at the county level.

The tool, developed by the USDA Economic Research Service, also happens to serve the dual role of becoming one of three datasets that Agriculture plans to add to its contributions to Data.gov as agencies continue to comply with the White House Open Government Directive.

While the tool is labeled as a method for the public to access information about their local food environments, such as county-level proximity to grocery stores or fast food restaurants, there is actually far more data buried here than its title indicates that would be very helpful to researchers and reporters, beyond just food issues.

Combining Agriculture Department data with data from the National Institutes of Health, the Centers for Disease Control, and the Census, the map provides 90 different searchable indicators, ranging from food prices to obesity rates to racial demographics, and a county’s proximity to fitness or recreation centers.

Users can select factors to map and even compare specific counties. For example, I was able to quickly compare two U.S. counties: Marin County in northern California, and Buffalo County in central South Dakota. Anecdotally, we know that Marin County is pretty affluent while Buffalo County is known as the poorest county in the United States based on per capita income.

Using the tool, those facts get greater context when you consider that 80 percent of Buffalo County is low income and lives greater than one mile to a grocery store, while only 3.4 percent of Marin County’s population is.

The tool still has some shortcomings. It’s not easy to figure out what “null” and “undefined” mean in the returned results for example. The site also may present some challenges to those not used to querying databases and there are occasional freezes and error messages. Users also have to read the documentation section carefully to really get a sense of what they are looking for. One great thing about the site however is that the data in the tool is available for bulk data downloads into an excel spreadsheet.

Two other datasets that the Agriculture Department plans to release to Data.gov include the National Agricultural Library Thesaurus in English and Spanish which contains 78,000 agricultural terms, updated each January since 2002. While the thesaurus is probably useful to those that work directly in agriculture, it is interesting to learn that the parasitic wasp Aphelinidae is known as the Ablerus in Spanish, and No. 1748 to the Department of Agriculture. Also in the thesaurus is an entry for “abnormal behavior,” known as No. 1750 to the department. Among its related terms are “behavior disorders,” “mental health,” and “cannibalism.” And in Spanish, it’s known as “conducta anormal.”

The last dataset Agriculture plans to release to Data.gov is the Women, Infants, and Children (WIC) Participating and Cost Data for each WIC state agency. The data contains monthly information for this federal food assistance program such as the number of pregnant women, breastfeeding women and post partum women and their average food cost and the administrative costs to run the program.

While these three datasets from Agriculture are useful, only the Food Environment Atlas is new. The WIC database is already public, and the Agricultural Library Thesaurus has been public since 2002. And Agriculture counts the Spanish version of the thesaurus as a separate dataset, so their count is four instead of three.

The map, thesaurus and WIC data will likely be added to Data.gov in June 2010. They will join three other databases that Agriculture added to the site in January: the Census of Agriculture Race, Ethnicity, and Gender Profile Data; the Feed Grains Database; and the USDA National Nutrient Database for Standard Reference, Release 22. The Department also has nine tools and one geodata catalog on crop condition information on Data.gov.

To share your thoughts on the Agriculture Department’s efforts on its Open Government Plan and to view what others are suggesting, visit the USDA comment site here.