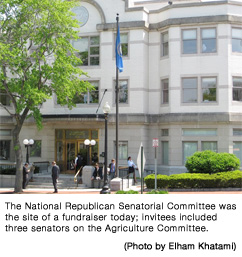 Since the beginning of 2010 through April, at least ten senators who sit on the Banking and Agriculture Committees are listed as beneficiaries of fundraisers hosted by lobbyists who have pressed Congress on financial reform issues. Both committees have recently worked on a bill to overhaul the financial regulatory system, which will likely be debated on the Senate floor next week.

According to Sunlight Foundation’s Party Time database, the fundraisers ranged from a “pre-St.Patrick’s Day” reception for Banking Committee member Jon Tester, D-Mont., on March 16 that asked for $100 to $1,000 in contributions, to a breakfast for Chuck Grassley, R-Iowa, of the Agriculture Committee on March 10 that asked for contributions ranging from $500 to $2,000. Grassley’s breakfast also featured special guest, Banking Committee member Robert Bennett, R-Utah.

Tester’s fundraiser was hosted by 28 people, at least two of whom have disclosed lobbying on financial reform this year: Mitchell Feuer who represents Goldman Sachs, the Citigroup Management Corporation, Barclays PLC, Genworth Financial, Visa U.S.A., the Appraisal Institute, FX Alliance LLC, the Farm Credit Council and the LCH.Clearnet Group, and Thompson Reuters; and Shannon Finley who represents the Edison Electric Institute, Rent A Center and the Home Depot.

The Grassley breakfast was hosted by two JP Morgan Chase & Co. lobbyists, Nathan Gatten and Steve Patterson. Both were listed on a lobbying disclosure form for the first quarter of 2010; the company reported spending $1.5 million to raise issues on Capitol Hill related to credit card transaction fees, the modification of home mortgage loans, the regulatory oversight of bonds, short-selling practices, and use of derivatives to hedge risk.

In addition to raising money for the beneficiaries, the lobbyists hosting the events also had a chance for face time with other influential lawmakers. In fact, at a fundraiser today, three powerful members of the agriculture committee–Minority Leader Mitch McConnell, R-Ky., and Sens. John Cornyn, R-Texas, and Chuck Grassley, R-Iowa., are listed as honorary hosts of a noon fundraiser for the Sen. George LeMieux’s, R-Fla, Protect America’s Future Political Action Committee.

The event also includes two hosts: Scott Reed who represents the Ben Barnes Group, a Texas state lobbying shop run by an individual who the Sunlight Reporting Group previously identified as the nation’s largest donor and bundler of campaign contributions at the federal level, and Kirsten Chadwick who represents the American Insurance Association, the Ford Motor Company, Mutual of Omaha, the Retail Industry Leaders Association, the Business Roundtable, and UnitedHealth Group. Both Reed and Chadwick, who was once a special assistant to President George W. Bush, have lobbied Congress in the first quarter of 2010 on financial reform issues.

The invitation to LeMieux’s fundraiser asks for a contribution of $2,500 for a PAC host, $1,000 for an individual host, $1,000 for a PAC and $250 for an individual for the “reception-style luncheon” at the National Republican Senatorial Committee to raise money for the PAC which “supports candidates who embody the values of fiscal conservatism, smaller government and strong national security.”

We contacted Sens. McConnell, Cornyn, and Grassley for comment. Sen. Cornyn’s spokesman said that the lunch was a National Republican Senatorial Committee event and referred us to that office for a comment. The spokesperson did add that the senator was in a budget mark up all day and that it was unclear if he would be present at the event.

Asked for comment about the nature of Grassley’s attendance at the fundraiser, Jill Kozeny, Sen. Grassley’s Communications Director, said “Senator Grassley attends events, like this one, to raise campaign funds for Republicans. His participation is transparent. For himself, he accepts donations that are legal and have no strings attached.”

We also staked out the building where the fundraiser was held, but didn’t see any of the senators come in or out. Some members of Congress have canceled fundraisers hosted by financial industry lobbyists and firms.

Here is a larger list of recent fundraisers for senators Party Time has found that were or will include financial reform lobbyists:

Here’s how you can do what we did to find out if your lawmaker has met with lobbyists working on financial reform:

Unfortunately invitations in the Party Time database only represent a portion of the fundraising events that take place in Washington D.C. The database consists largely of events sent to us by anonymous sources, where we then strip off all possible identifying information. If you know of a fundraiser in D.C. or in your state, please consider uploading it to our anonymous upload system.