Over the last few years, hospitals in a few states have consistently received more money than others from Medicare in so-called “outlier payments” for inpatient services. These additional payments are handed out when a hospital takes on an unusually expensive case.

This takeaway comes from a quick review of the Center for Medicare and Medicaid Services (CMS)’ “Dashboard,” a new online repository of spending data.

While the Dashboard is still in its beta version, and currently only has inpatient data (no home health or nursing home information, for example), a few points stood out.

From January 2006 through September 30, 2009, three states — Alaska, Hawaii and California — and the District of Columbia routinely received the highest dollar amounts in outlier payments when adjusted for total patient volume.

Here’s a snapshot of the dollar amounts each state received in the last quarter of fiscal year 2009, adjusted by the total number of patients seen.

(Again, click on the picture to see a larger version.) 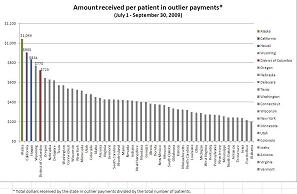 Another interesting way to look at this data is to ask what percentage of all the dollars a state’s hospitals spent on health care is going to these outlier payments. Is the state spending a lot of money on health care in general, or just on the expensive cases? When you look at it this way, you’ll notice that Wyoming stands out. 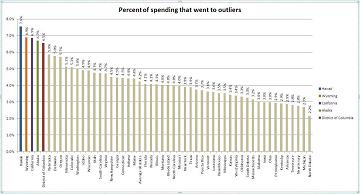 It remains to be seen why hospitals in certain states are spending so much on expensive services, but as Medicare rolls out additional data, it’ll become easier to find out. A cluster of these outliers can form for many reasons. There may be a higher number of severely ill people in a particular region, requiring long hospital stays. A certain hospital may be more expensive, perhaps because it’s a teaching hospital and tends to track more complicated cases.

Medicare’s Inspector General (IG) Office has conducted several investigations into outlier payments as possible sources of fraud or abuse. One of the most recent, in December 2009, found that one county — Miami-Dade in Florida — accounted for more outlier payments for home health care in 2008 than the rest of the country combined. The report called for further investigation into the matter.

A few simple additions would enable us to get to the bottom of this question. Currently, the data is only available on a statewide basis. A county-level view, or better yet, information on individual hospitals, would enable reporters to look for patterns much as the IG’s office did. Also, data is needed on the age of the patient population, which bears heavily on cost. This was likely a factor in the Miami-Dade case, for example. Finally, CMS needs to include other types of facilities in its future releases, such as nursing homes, home health and outpatient services.

This is just a preview of what reporters will be able to do with Medicare data over the coming months. Another excellent site that CMS presented this month is data.medicare.gov, an interactive site that includes information about quality of care. Some of that data is presented for each hospital. More on that soon.