A friend and colleague passes along the following email the Democratic Congressional Campaign Committee is sending out, signed by the widow of the late Rep. John Murtha, D-Pa., Joyce Murtha: 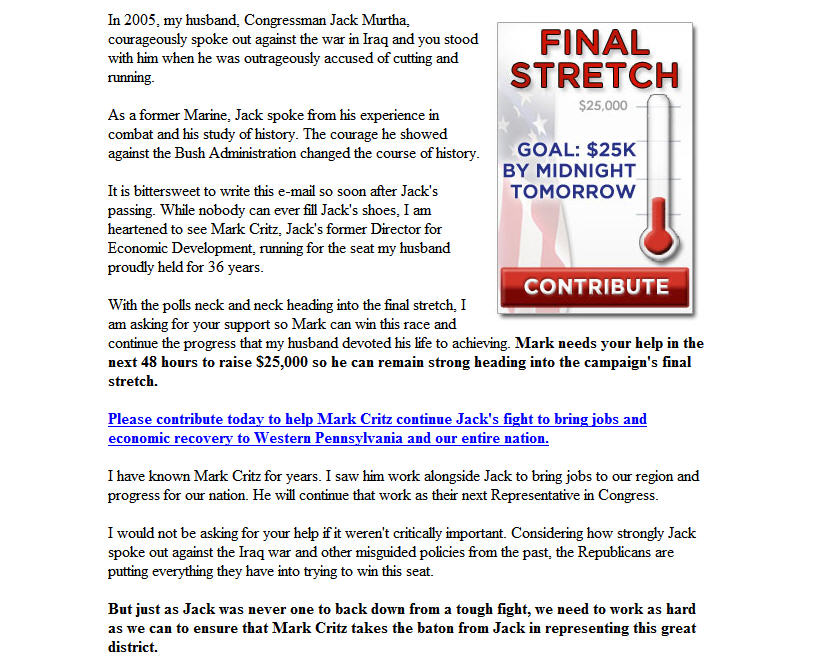 It is bittersweet to write this e-mail so soon after Jack’s passing. While nobody can ever fill Jack’s shoes, I am heartened to see Mark Critz, Jack’s former Director for Economic Development, running for the seat my husband proudly held for 36 years.

With the polls neck and neck heading into the final stretch, I am asking for your support so Mark can win this race and continue the progress that my husband devoted his life to achieving. Mark needs your help in the next 48 hours to raise $25,000 so he can remain strong heading into the campaign’s final stretch.

Murtha’s primary means of bringing jobs and economic recovery was via earmarks, many of which went to clients of Murtha’s biggest contributor, PMA Group. The House Ethics Committee investigated and exonerated Murtha and six other members of Congress for their earmarks to PMA Group clients. The Washington Post noted that Critz has benefited from contributions from former employees of and clients of the now defunct PMA Group. Critz compiled lists of earmarks for Murtha to approve; according to the Post, Murtha approved the list without changes.

More on Critz’s fundraising on our Party Time blog.