The Nebraska Democrat pleaded ignorance when asked this week whether Congress should cap ATM fees. Nelson said that while he’s no fan of unnecessary fees, he’s unfamiliar with the charges.

“I’ve never used an ATM, so I don’t know what the fees are,” Nelson said, adding that he gets his cash from bank tellers, just not automatic ones. “It’s true, I don’t know how to use one.

“But I could learn how to do it just like I’ve . . . I swipe to get my own gas, buy groceries. I know about the holograms.”

By “holograms,” Nelson clarified that he meant the bar codes on products read by automatic scanners in the checkout lanes at stores such as Lowe’s and Menard’s. 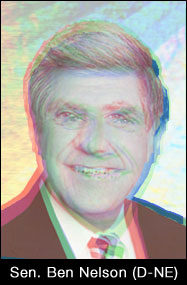 Nelson, of course, has received large sums of money for his campaigns from the very industry that creates these irritating ATM fees. Over his career Nelson has received $351,647 from commercial bank political action committees and their employees, according to the Center for Responsive Politics. You’d think that, being a senator and accepting so much money from one industry, you would want to learn the issues that effect regular people on a day-to-day basis.

This is what you should expect to get when you elect a majority of multi-millionaires to the Senate. These men and women don’t partake in the same kind of everyday actions that everyone from the poor to the upper middle class do. Using an ATM, driving yourself around, flying coach, buying groceries, receiving a mortgage or car loan with so much jargon filled fine print you wind up getting screwed. Maybe some millionaire senators engage in some “normal people” behavior for electoral reasons, but they really don’t have to worry about the same things that your everyday person does.

This creates a Mr. Burns effect in the Senate where so many of these senators are so out-of-touch it can be shocking at times. Just read that whole Omaha World-Herald article and you’ll find out that Sen. Mike Johanns and Sen. Chuck Grassley don’t use ATMs. Johanns has used one “five or fewer times” in his life. Both of these senators are also millionaires.