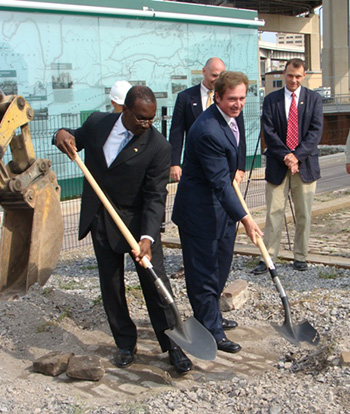 Time was running out for an $11.8 million federal earmark to redevelop the Inner Harbor of the Buffalo River where it empties into Lake Erie. Like most earmarks, the recipient – the Erie Canal Harbor Development Corporation – had only three years to spend the funds before the money lapsed. In Buffalo, that meant the corporation had until October 2007, or else lose it for good.

There were once grand plans for the earmark; In 2005 the corporation had hoped to build a transportation museum that would anchor a mass of amenities and development at the Inner Harbor. But the Federal Transit Administration deemed a museum, even one based on transportation, an ineligible expense of federal transit dollars and the project idled.

Faced with the prospect of losing millions, the corporation and staffers at Rep. Brian Higgins office, of the 27th District of New York, got to work in August 2007 to broker a deal with the local transit system, the Niagara Frontier Transportation Authority.

Within a couple months they got the lapse date extended for a year and had hashed out a perfectly legal solution that was known as “the switcheroo” amongst those involved: The FTA would tacitly permit a transfer of the $11.8 million to the transportation authority to purchase 24 hybrid busses.

In return, the transportation authority would pay back the corporation the $11.8 million from their own grant allocations from the FTA with zero interest, said NFTA Chief Financial Officer Deborah Leous.

Higgins widely publicized the maneuver, calling it a save for Buffalo: “Allowing these funds to vanish into the bureaucratic abyss of Washington was never an option,” Higgins said in a statement when the deal was approved in January 2009. “With the help of the NFTA and people in Washington we fought to keep these resources here,” he said again in October 2009 when the funds were officially repurposed to the transit authority.

Those involved see this as a win-win situation for Buffalo, but it’s also a prime example of how communities and lawmakers deftly maneuver the earmark process, particularly when a particular earmark doesn’t pan out, and would have been lapsed and been spent elsewhere in the country at the discretion of the FTA.

“It’s not uncommon for a grantee, when they realize that an earmark may be lapsing to look for eligible ways to spend that money,” said FTA spokesman Paul Griffo.

While earmarks are commonly written with an intended recipient in mind, only project titles actually appear in the language of the law, so any recipient that fits that project can apply. When an earmark is close to lapsing, transit officials notify potential recipients to spur them to utilize the allocation.

In prior years the lawmakers simply requested and got extensions on earmarks that didn’t come to fruition, until a viable project could be found. In fact, the $11.8 million earmark for the Inner Harbor project already represented the combined total of a slew of older earmarks made by past New York lawmakers going back a decade.

“Originally those funds had come to an NFTA to do work on a transportation center in Buffalo, but because we couldn’t get that project off the ground and didn’t want it to lapse, it went to the City of Buffalo to use on an intermodal station which couldn’t get off the ground. And then the money went to the Empire State Development Corporation, and they couldn’t use it, and now it’s back full circle to NFTA, and now I have to pay it back; But it was mine to begin with!” Leous joked.

Despite the tortuous path, Leous said she had no problem with her transit agency entering into a memorandum of understanding with the corporation to pay the transit agency. After all, it allowed the transit authority to replace their aging buses at a faster rate than they normally would have, saving them on operation and maintenance costs. But Leous also said that they would have likely bought the buses in the coming years on their own. In 2008 for example, they had already purchased 13 hybrid buses.

“Assuming that we could get money from grants or stimulus money, we would still be buying buses, this just helped to accelerate it,” Leous said. “We’re helping each other in the community, and then everyone benefits.”

Rep. Higgin’s Chief of Staff Andy Tantillo said that while the ideal situation would have included the intended recipient using an earmark for a viable project that actually got built before the money lapsed, the reality is that no community wants to pass up on funding.

“It would have been better if they could have been used immediately and for the projects stated in the appropriations bills,” said Tantillo. “But the unacceptable outcome would have been to lose these funds that will produce jobs in Buffalo. At the end of the day our community purchased needed buses and the development at the Inner Harbor will move forward, and we were proud to help bring about that outcome.”