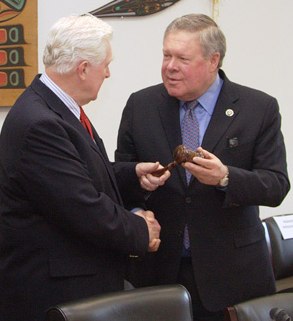 Year after year, the late John Murtha used his influence on the House Defense Appropriations Subcommittee to bring tens of millions of dollars in earmarks to his district–hard hit by the declining fortunes of the steel and coal industries–to in effect create a new economic base fueled on federal spending. Sen. Robert Byrd did the same for West Virginia. But do such efforts actually work? Does spending taxpayer money spur private sector development?

A new study from researchers at the Harvard Business School suggests that the answer is no; that public spending doesn’t stimulate private sector activity. The three authors, Lauren H. Cohen, Joshua Coval and Christopher J. Malloy, do so by measuring earmark and other spending going to states whose elected lawmakers have just landed powerful committee chairs. They find a correlation between the presence of a committee chair and a state’s share of federal dollars:

We focus specifically on the 232 instances over the last 42 years where the senator or representative of a particular state ascends to the chairmanship of a powerful congressional committee. During the year that follows the appointment, the state experiences an increase of 40-50 percent in their share of federal earmark spending, and a 9-10 percent increase in total state-level government transfers. The funding increase persists throughout the chair’s tenure and is gradually reversed upon his departure.

Their analysis attempts to quantify something that many of us who follow earmarks have long thought:

The researchers conclude that after a state gets that positive shock, however, the private sector doesn’t fare as well:

…we investigate the private sector consequences of seniority shocks by studying the behavior of the public corporations headquartered in the congressman’s state. Focusing on the investment (capital expenditure), employment, R&D, and payout decisions of these firms, we find strong and widespread evidence of corporate retrenchment in response to government spending shocks. In the year that follows a congressman’s ascendency, the average firm in his state cuts back capital expenditures by roughly 15%. These firms also significantly reduce R&D expenditures and increase payouts to their investors. The magnitude of this private sector response is nontrivial: in the median state (which receives roughly $200 million per year in increased earmarks and federal transfers as a result of a seniority shock), capex and R&D reductions total $39 million and $34 million per year, respectively, while payout increases total $21 million per year. These changes in firm behavior persist throughout the chairmanship and begin to reverse after the congressman relinquishes the chairmanship. We also find some evidence that firms scale back their employment, and experience a decline in sales growth.

A few concerns about the study–earmark data does not seem to be comparable over the period they’re looking at (and remember, there was no real earmark disclosure prior to 2007).  It’s also not clear that the committee chairman positions they’ve chosen to study–which vary throughout the paper–are the most relevant to appropriations (for example, Rep. James Moran, D-Va., has never been chairman of the Defense Appropriations Subcommittee, and only recently landed the chairmanship of the Interior Appropriations Subcommittee, but he’s certainly brought home a lot of pork to his district, which benefits from a huge amount of federal contracts as well).

That said, the finding that the political power of individual members of Congress changes the flow of federal spending is well worth devoting further research to. Hat tip to the Atlantic’s Megan McArdle for spotting it; she also raises some concerns about the study.