When you apply for a job, you always need a resume. Usually, you also need to furnish some examples of prior work.

When you apply for the United States Supreme Court, well, they want everything.

Tom Lee of Sunlight Labs has made the Supreme Court confirmation hearings for Elena Kagan starting this Monday more accessible for citizens and journalists (and Senators!) by putting the emails sent by Kagan during her time in the Clinton administration in “a more familiar interface” – a good old email inbox!

You can find it at: http://ElenasInbox.com

It’s a great way to become Kagan for a day and see what issues and policy decisions she was involved in while serving as Associate White House Counsel (among other positions) from 1995 – 1999. There are almost 5000 emails (in about 2800 threads) and we’re still digging through them.

If you do some additional research on the people, places or events mentioned in the emails and think one of our investigative reporters should take a closer look, email tips@elenasinbox.com or tweet out the information using the hashtag #elenasinbox.

Be sure to read site creator Tom Lee’s excellent post on this project – it focuses on the flaws in how this data was originally released. Below you can find some of the emails that I’ve been reading.

Apparently, mousepads were in short supply the month Kagan started with the White House, back in July, 1995:

We all know that all White House administrations leak information to the press all the time. But sometimes it takes a village to get it done! Note the 8 people that needed to coordinate on a leaked letter regarding school class sizes to the Washington Post:

Other stories were planned leaks. Here’s a leak in 1999 designed to give a New York Times reporter background on a Federal Bureau of Alcohol, Tobacco and Firearms report on gun violence in order to get the Times to run an article on the report in the Sunday edition.

When the AP reported a story regarding President Clinton’s intent to keep harsher penalties for selling crack cocaine vs powdered cocaine, Kagan responded with a dim view on how the story would be spread: 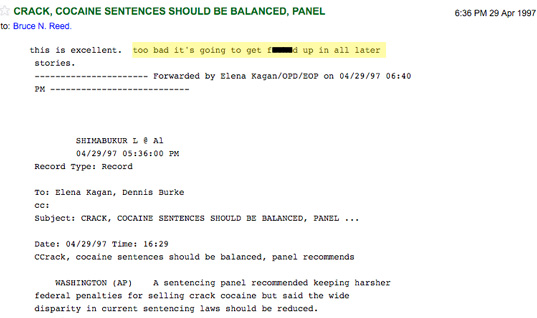 Bruce Reed was the White House domestic policy director at the time. Note this is only one of two instances I could find of the f-bomb being dropped in emails sent from Kagan. Many of us probably beat that statistic in our own inboxes. :)

This is only scratching the surface: remember to send us email tips (tips@elenasinbox.com) and tweet the hashtag (#elenasinbox).

If you want to keep seeing innovative tools from us we always appreciate tax-deductible donations!

Note: right now we only have email sent by Elena Kagan. We’ve begun to look at the emails she received – it’s a very messy source so stay tuned to our Twitter account for updates.