Just as there is now a new cap being fitted over the leaking oil well is patching a mechanical failure, we are left wondering whether the now-defunct Minerals Management Service (MMS) will be fixed as well.

Online transparency needs to be a part of the administration’s response to their own failure, and so far, it isn’t.

The American public has been engrossed by the physical effort to stop the leaking well — a public display of underwater engineering with divers, oiled sea life, and animations of complex drilling machinery.

There will also be a response to the regulatory failure, but the governmental response isn’t likely to have a live camera on the lobbyists, ethics rules, or complex regulations that will result from the disaster.

We may need it, though.

Just as public attention on the images of spilling oil have driven the policy response to this disaster, only real public scrutiny will guarantee effective government oversight. Online transparency needs to be a part of the administration’s response to their own failure, and so far, it isn’t.

One place we’ve already begun to take action is at the agency in charge of regulating drilling and issuing permits, known as the Minerals Management Service. Over the last decade, this agency has become emblematic of a failed philosophy that views all regulation with hostility — a philosophy that says corporations should be allowed to play by their own rules and police themselves. At this agency, industry insiders were put in charge of industry oversight. Oil companies showered regulators with gifts and favors, and were essentially allowed to conduct their own safety inspections and write their own regulations.

While Obama does acknowledge the regulatory failure, he leaves out the role the media has played in illuminating these failures, and, perhaps as a consequence, omits public oversight from his plans for reforming the MMS.

The stated plan for MMS reform is to hire a new director:

When Ken Salazar became my Secretary of the Interior, one of his very first acts was to clean up the worst of the corruption at this agency. But it’s now clear that the problem there ran much deeper, and the pace of reform was just too slow. And so Secretary Salazar and I are bringing in new leadership at the agency — Michael Bromwich, who was a tough federal prosecutor and Inspector General. And his charge over the next few months is to build an organization that acts as the oil industry’s watchdog — not its partner. So one of the lessons we’ve learned from this spill is that we need better regulations, better safety standards, and better enforcement when it comes to offshore drilling.

Michael Bromwich and his new role are presented as a suitable proxy for the public interest. If Obama wants to distinguish the administration from the industry response to this kind of failure, however, renaming the MMS and shuffling in new leadership aren’t going to do the job.

That’s what we’ve gotten so far, though — MMS will now be the Bureau of Ocean Energy Management Regulation and Enforcement (BOEMRE), and Elizabeth Birnbaum has now been replaced by Michael Bromwich.

If this experience has taught us anything, though, it’s that we shouldn’t accept public officials as a replacement for public scrutiny. If MMS under Salazar saw problems that “ran much deeper,” and “the pace of reform was just too slow,” as Obama noted, then why should BOEMRE operate any differently? Should we just trust Bromwich’s reputation as a change agent?

In responding to such a disaster, the administration can either be associated with the mistakes or their solutions.

The MMS website, with its message of a transition, can either represent a band-aid on a hemmoraging oversight agency, or it can be the beginning of our collective ability to hold industry and government accountable.

To start with, new leadership should post the documents and data online from the old MMS. Contingency plans, leases, Development and Production Plans, inspection reports, ethics waivers, and other essential information should be affirmatively posted online for everyone to see. MMS’s failures should be examined, scrutinized, and used to propel real reform within the new agency.

Any of these reports and data that are publicly available, but not online, should be freely posted on the new site, as soon as possible. 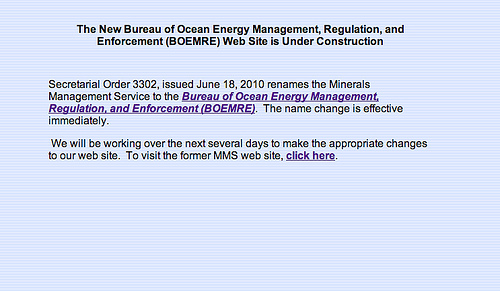 The administration should consider whether the strict restrictions on stimulus lobbying may be appropriate for a bruised and ineffective regulator like BOEMRE. If merit-based decision making needed special protection for the stimulus spending, it certainly needs it here.

If online transparency is to be a tool for strengthening trust in government and dispelling corruption, then it should be a tool for fixing our oversight of offshore drilling. The Obama administration can start by affirmatively posting the accountability data they have relating to the old MMS, and by guaranteeing that the MMS transition isn’t just another failed blowout preventer.