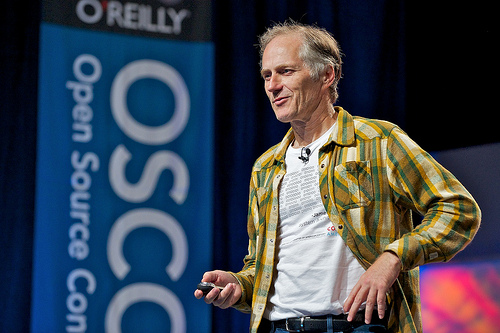 Last week I was fortunate enough to attend OSCON in Portland, OR. This year OSCON hosted hundreds of talks on a dizzying array of subjects. The hot topics this year were definitely cloud computing and languages, established and emerging.

Most interesting to me though was the emphasis on government, social issues, and information freedom. Tim O’Reilly’s opening keynote set the tone for many of the later talks by calling for the open source community to use its expertise in cooperative problem solving to address pressing issues in government and society. There were also keynotes from Portland’s Mayor Sam Adams and DC’s Chief Technology Officer Bryan Sivak on the importance of open source in local government.

Outside of the keynotes there was also an entire track on government. I’ll mention just three of the talks that I found particularly interesting.

Code for America is a fellowship program placing web technologists in city governments–“Teach for America for geeks.” This year they’ll be sending 23 fellows to DC, Boulder, Philadelphia, Boston, and Seattle. Bryan explained that there is a great need in local governments for people with modern technology skills–not just in software development, but in areas such as legal, sales and support–what Bryan called a “civil stack.” An astonishing 87 percent of the country’s municipal workforce is over 40 years old, according to Jennifer, and 60 percent plan to retire within five years. I took this as an encouraging fact: within the next five years we might see an enormous generational shift in local governments.

Gregory, Executive Director of the Open Source Digital Voting Foundation (OSDV), explained some of the problems with privatizing voting systems. Developing a new voting product could cost on the order of $4 million, with various testing and certification requirements costing another $8 million, all for a market that in its entirety is no more than 2 million machines. The high costs and low volume mean it’s simply not worth entering the voting machine market. Consequently, two companies control 88 percent of the market. To counter this market failure, OSDV launched the Trust the Vote project, a collaborative effort to develop open source voting and elections management technologies. Trust the Vote will have its first test in the 2010 elections, including in DC’s absentee voting system.

Drawing on the four software freedoms, Kirrily defined the four data freedoms as the freedom to download data, the freedom to study data, the freedom to distribute data, and the freedom to modify data. Progress has been made on releasing data under open licenses. What’s lacking, Kirrily said, are the workflows and tools that have made open software so successful. The current model is “throwing data over the wall.” To support real collaboration we need to address areas such as support, patching, versioning, and provinence. In short, we need bug trackers and version control oriented for data. Freebase is, of course, taking a stab at some of this.

You can check out slides and video for many of the talks on the OSCON proceedings page.