Crowdsourcing makes me feel all warm and fuzzy inside. Think about it: tapping into the ingenuity of your peers to capture the best ideas and information out there? It’s a marvelous use of online communication, and it’s powering our latest project, Sunlight Campaign Ad Monitor (“Sunlight CAM” for short).

With your help, we’re building a resource to track campaign spending this election season, and we’re excited that so many of you have decided to be involved. Sunlight CAM has only been live for a week, and already you’ve submitted over 80 ads, with more added each day from all across the country and the aisle. 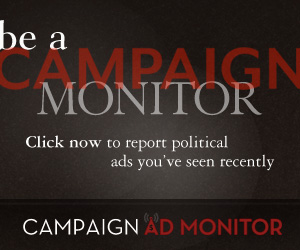 When you take the three easy steps to report an ad that you saw on television or the Internet or that you’ve heard over the radio, you provide reporters, bloggers and your peers access to information about who’s trying to influence your votes. Now that the DISCLOSE Act has failed in the Senate for the second time, it’s more important than ever that we work together to watchdog Washington. The more information you provide about the ads you see or hear, the more information we can dig up about the ad’s sponsor.

We’re already using the data you’ve picked up on: Earlier this week, my colleague Lindsay took at look at some of the data you’ve provided and found some interesting results. Researching one ad by the 60 Plus Association revealed that the organization spent almost half a million dollars of PhRMA-backed money against Pennsylvania Representative Paul Kanjorski in September alone (!).

As we head into the thick of political advertising battles that mark October (a.k.a. The Final Countdown), we urge you to keep your ears and eyes open and to keep those reports coming.