Crossroads Media has a slew of conservative leaning political organizations as their clients spending millions in the run up to mid-term elections on ad buys. The company has processed more than $10.6 million worth of ad placements this election cycle (not all that money ends up with Crossroads Media–the bulk goes to the television, radio, cable and other outlets that run the advertisements it places). 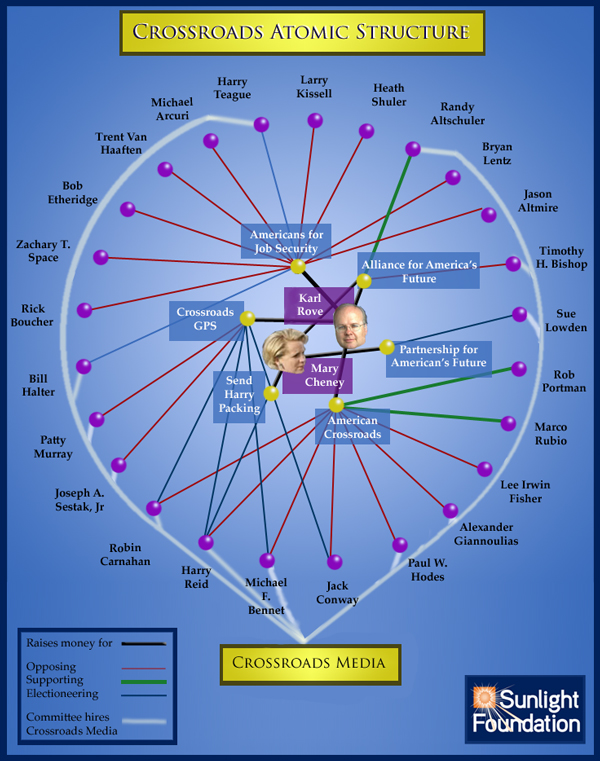 Crossroads media is on the top five media companies hired so far in this election cycle.According to an analysis using new Reporting Group tool — Follow the Unlimited Money — that tracks all outside spending for the mid-term elections these six organizations have spent $14,959,800 backing six Republicans and opposing 19 Democrats and supporting three Republicans, according to independent expenditure reports filed with the Federal Election Commission.

A large portion of the spending by these six groups goes to Crossroads Media. For instance, American Crossroads has spent $691,700  to oppose Sen. Harry Reid, D-Nev. The majority of the money, $666,500 went to Crossroads Media for Media Placement. The remainder, $25,100, went to Wilson Grand Communications for TV and media production.

Another example is Crossroads GPS’ electioneering campaign against Sen. Michael Bennet, D-Colo., where they spent $213,477 and part of the money went to hire Crossroads Media.

Mary Cheney does not have a connection to Amercians for Job Security, as misstated in the previous version of this post.