While digging through 2010 midterm independent expenditure data we noticed the organization Citizens for Strength and Security (CSS) Action Fund; an entity that said it was “active in issue advocacy across the nation.” I found it surprising that Senator Patty Murray (D-WA)’s campaign was totally unaware of a “national organization” spending $640,410 in support of her campaign. Unless, of course, it’s not a national organization at all.

My colleague Ryan Sibley investigated further and discovered CSS Action Fund’s origins were not in the heartland but right here in Washington, DC. Far from being active nationally, CSS Action Fund has been focused like a laser on Washington state and Colorado. 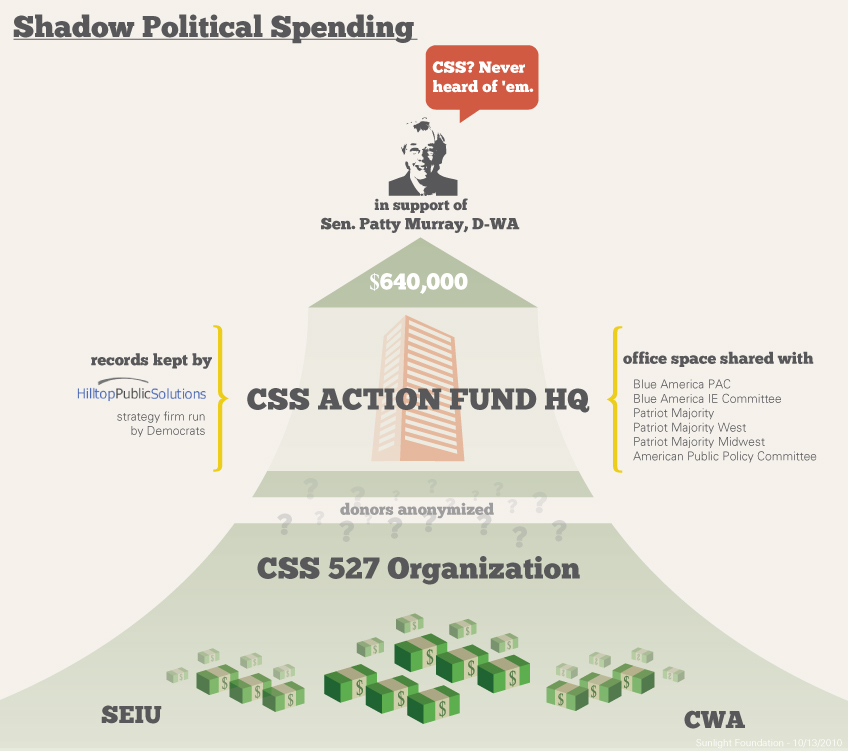 Organizations such as the Service Employees and International Union (SEIU) and the Communication Workers of America (CWA) are the powerhouses behind this byzantine layering of ambiguously named organizations.

What we do know is that SEIU and CWA are the biggest donors to an organization with the identical name as CSS Action Fund and an almost identical website. The styling code is almost identical and graphics are reused between the two websites. Click the image to the right to see a side by side comparison.

CSS Action Fund’s legal records and website domain are being kept by Hilltop Public Solutions, a firm run by Democrats with long political resumes.  CSS Action Fund is also sharing its address with several other political action committees. While it’s not a slam dunk connect-the-dots scenario, it outlines a web of influence and money that begs to be investigated further.