Outside groups that have not disclosed their donors have dumped more than $1 million into each of 14 Senate and 18 House races. As much as $110 million has been pumped into the elections so far by political groups that have yet to disclose their donors, reports submitted to the Federal Election Commission show, and this "dark money" from unknown contributors has impacted 168 congressional races across the country.

The Illinois Senate race between Democratic candidate Alexander Giannoulias and Republican Mark Kirk has attracted the most dark money so far in the mid-term elections, with $6.8 million coming from sources that haven't disclosed their contributors. Giannoulias, hoping to hold onto the seat that was once occupied by President Barack Obama, has been the target of more dark money attacks than any other candidate–more than $4.4 million.

In the California Senate race between Sen. Barbara Boxer, D-Calif., and her challenger Carly Fiorina, outside groups taking money from undisclosed donors have spent $5.61 million. More than $4.6 million of the money from groups that haven't disclosed donors has come from the U.S. Chamber of Commerce. Other than the business conglomerate, most of the spending in this races comes from pro-life or pro-choice groups for the women candidates.

In all, more than $52 million comes from undisclosed sources for the various Senate races.

Among the House races, Colorado's 7th district, where Rep. Ed Perlmutter, D-Colo., faces challenger Ryan Frazier, Nevada's 3rd district, where freshman Rep. Dana Titus, D-Nev., faces a challenge from Joe Heck, and Pennsylvania's 12th district are on top of the list. The Pennsylvania seat was once held by the late Rep. John Murtha, the defense earmark king who was mired in ethical controversies surrounding his relationship to Paul Magliocchetti, a lobbyist who pled guilty to illegally funneling corporate campaign contributions to members of Congress. In that race, Murtha-protege Mark Critz, the Democratic incumbent, faces Republican Tim Burns.

So far there are 110 groups that have not disclosed their donors. A few that might still disclose their donors, but others, such as the U.S. Chamber of Commerce, a non-profit, 501(c)6 organization, and Crossroads GPS, a non-profit 501(c) 4, are not required to. Other organizations that are required to disclose donors, known as 527s after the section of the tax code they're organized under, might not have to file their quarterly disclosure reports until after the Nov. 2 election.

The U.S. Chamber of Commerce, has spent the most among the dark money committees, followed by the American Future Fund which has spent the most in the Alabama second district race running ads in opposition to Rep. Bobby Bright, D-Ala., and Crossroads GPS., whose biggest target, drawing more than $4.4 million worth of negative ads, has been Illinois Senate candidate Giannoulias.

According to an analysis of the reports filed with the FEC, there is no pattern yet that these groups that are keeping their donor base a secret are spending money in a specific geographical area or are spending more liberally on some races, but with still a few days from Nov. 2 a better picture may emerge in the weeks and months to come.

The 2010 mid-terms are the first election in which organizations can take unlimited donations from corporations, labor unions and individuals, due to the Supreme Court ruling in the Citizens United case, setting the stage for non-profit organizations that don't have to disclose donors to expressly advocate the victory or defeat of federal candidates. Some organizations that do disclose donors show only contributions from these nonprofit organizations, meaning that the ultimate source of political spending remains hidden. The ruling also allowed labor unions to use their dues to fund political advertising, opening the floodgates to union money.

This is also the first time there has been a dramatic change in the spending patterns as outside organizations have collectively dwarfed the spending by Republican and Democratic party committees, which have most often taken the lead in independent spending. 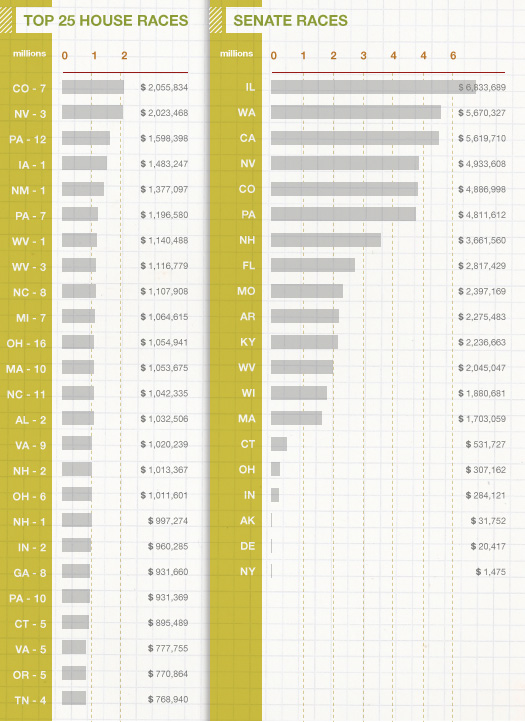