It’s been a while since recovery.gov was in the headlines. ARRA money continues to go out the door, but it’s safe to say the program is winding down. The Administration has been taking a quiet victory lap, including this charming video, in which Vice President Biden calls up an ice creamery in Santa Cruz that got off the ground thanks to a Recovery Act loan:

Here’s a crazy idea: why don’t we look up this loan on recovery.gov and see what else we can discover about it?

Let’s start with the advanced search page. The simplest thing is probably to look for the name of the business: “Penny Ice Creamery.” No results. But don’t worry, we’re just getting started. How about “ice cream”? No results (which is weird, because when I tried this yesterday I got a bunch). “Penny” produces a few results but not the right one.

There are some more clues in the video, though. We know that the loan was made through Lighthouse Bank, which was able to offer it due to something the bank representative calls the SBA 90% program. A little Googling shows that this probably refers to the Recovery Act’s 7(a) provision, under which the Small Business Administration eliminates fees and guarantees 90% of loans made by banks to qualifying small businesses. Maybe this is just a level-of-reporting problem: perhaps the bank is listed, but not the loan recipient.

Nope. No matches for “lighthouse” under the SBA.

Let’s try to make this as broad as possible. All types of awards — grants, contracts and loans — in all of California that were issued by the SBA (it’s safe to limit it to California — the bank in question is located in Santa Cruz, just like the ice cream shop). Surely that’ll capture this success story. A search like that turns up 19 records. Some of these can obviously be eliminated: they’re for phones or furniture or electrical work. Some are lending programs which target specific counties that aren’t Santa Cruz.

This leaves us with a handful of entries with sufficiently vague descriptions that they might pertain to the business in the video:

But to be honest, none of these look very likely. Four of the five are from SBA grant programs, and we know this was a loan. And nobody in the video said anything about the Pacific Asian Consortium in Employment. It seems a lot more likely that this spending just isn’t in the system, or is mislabeled in some way that makes finding it impossible. 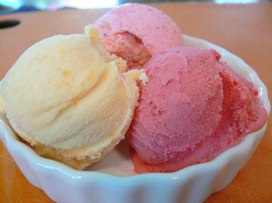 To be fair, there’s probably a good reason for this. There’s almost always a good reason for this kind of thing! Sloth and incompetence by our public sector employees is actually pretty uncommon, as anyone who starts working on these problems tends to quickly learn. But government does have some pathologies, and one of them is building new projects without fixing older, less exciting foundational pieces. And I think that’s where we are with recovery.gov. Being able to monitor public spending both in aggregate and granular detail holds an incredible amount of potential — for oversight, for economic development and for improving our policies. But we clearly aren’t there yet. And there’s no reason to think that this missing record is the only one.

Does the site do some good things? Sure, of course it does. It offers bulk data downloads, it has some impressive mapping technology and — perhaps most importantly — it represents a serious commitment by government to inform citizens about the use of their money. Government achieving even half of the vision for a site this ambitious would have been unthinkable just a few years ago.

But we have a long way to go before the picture is complete. As Sunlight’s Clearspending project shows, there’s still a lot of work to be done on the systems upon which recovery.gov is built. And there are even more foundational challenges ahead of us, like improving upon the proprietary and incomplete corporate identifier system currently used by the government (as of today, you won’t find the Penny Ice Creamery through a DUNS search).

This is important stuff — much more important than sticking the broken data we currently have on a map. There’s a lot of work ahead of us before we can achieve the vision for federal spending transparency embodied by recovery.gov, but it’s going to be worth it.