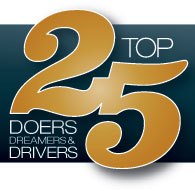 It is an honor to be among the twenty-five recipients of Government Technology’s award for ‘Doers, Dreamers & Drivers in Public Sector Innovation‘. I’m also excited to see acclaim for other leaders of the open government movement including SeeClickFix‘s Ben Berkowitz, a fellow Omidyar investee.

Since our founding, the Sunlight Foundation has sought to challenge the status-quo of Washington politics and improve access to government information for all citizens. This award is an indication that transparency is moving from a political buzzword to the codified reality we want. Government data — of all types, but especially about who is trying to influence whom — should be online in as close to real time as possible unless it is a legitimate threat to our national security or compromises personal privacy.

Changing the culture of Washington (and all levels of government) is tough process, but when the assumption is to free the data it creates a more accountable and responsible government. It is exciting to see the open government movement grow.  I hope you join us.