Last weekend, I spoke at the Slashroots conference, held at the University of the West Indies Mona School of Business.

The centerpiece of the conference was a code sprint contest, where developers competed over 24 hours to build the best apps on top of a new API developed by the Jamaican Ministry of Agriculture. The competition was well designed and attended, featuring aspiring developers from across the region, building mashups, websites, and mobile apps.

At the end of the competition, Yamzilla was chosen as the winner. The site was designed to help commercial food purchasers connect with local food providers through novel presentations of the agriculture API data. This would clearly be a valuable reuse of government collected data. 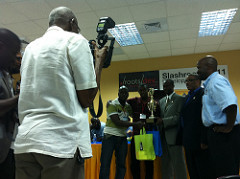 My presentation focused on civic reuse of government data in the US, featuring projects like GovTrack.us, OpenCongress.org, Poligraft.com and InfluenceExplorer.com, along with the exploding issue of transparency and the Obama administration’s response.

My thesis was that technologists and advocates are only just starting to understand their potential to change how governments work and how citizens can relate to power. It’s heartening to remember that what we’re going through is a global movement towards empowerment and transparency through technology, and technology and policy successes don’t see borders as barriers.

The conference itself, and my involvement, were both generously supported by the IDRC.