From 1998 to 2009 spending on lobbying expanded by nearly 150 percent. Spending grew across the board during this period, but when looking at the share of lobbying spending some sectors expanded their dominance, while others  shrunk or remained stagnant. (All sector data comes from the Center for Responsive Politics.)

The biggest loser over this eleven year period is the Agribusiness sector. Agribusiness lobbying shrunk from a peak of 8.2 percent of all lobbying spending in 1998 to only 3.9 percent in 2009. It should come as no surprise that talk of ending agricultural subsidies has begun to gain more traction in congressional circles. 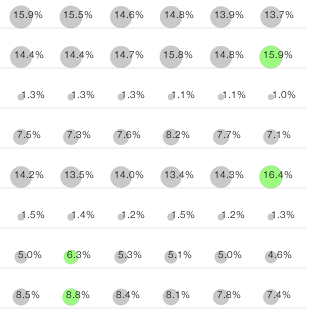 (Click the image to the right to see lobbying percentages by sector.)

The biggest winner over this period was the Health sector. This comes as no surprise as health care was the focus of so much policy-making during the first decade of the 21st century. In 2002 and 2003 Congress debated and ultimately passed a prescription drug benefit for Medicare recipients and from 2008 to 2010 Congress was consumed with a debate over a full scale reform of the nation’s health care system. During this period the Health sector moved from accounting for 11.7 percent of all lobbying spending to 15.9 percent.

Another sector that has seen major lobbying expansion has been the miscellaneous business sector. This sector is largely made up of industry trade groups and is topped by the U.S. Chamber of Commerce, which reported $17 million on lobbying in 1998 and $144 million in 2009. The Miscellaneous Business sector topped all 2009 sectors in lobbying spending with $573 million. This accounted for 16.4 percent of all lobbying–the highest percentage ever held by one sector–and a gain from 13.2 percent in 1998.

Some of this rise in the Miscellaneous Business sector can be attributed to the disclosure method used by the U.S. Chamber of Commerce. According to a report by the Sunlight Foundation Reporting Group’s Bill Allison the Chamber elects to report their lobbying expenses under a different statutory definition than most other lobbying organizations. The Chamber reports under section 162(e) of the Internal Revenue Code, which requires the disclosure of “any attempt to influence the general public, or segments thereof, with respect to elections, legislative matters, or referendums.”

In recent years, tracking with their dramatic increase in reported lobbying expenses, the Chamber has launched an array of issue ads and electioneering communications likely totaling tens of millions of dollars in spending. The reporting of this political spending in their lobbying expenses may slightly skew the percentage increase in the Miscellaneous Business sector.

One consistent powerhouse sector is the Finance, Insurance and Real Estate. The sector has consistently spent on money year after year and has accounted for more than 13 percent of all lobbying for the past twelve years. The sector’s biggest year, in terms of share of lobbying spending, came in 2003 when the sector accounted for 16.1 percent of lobbying spending. The sector’s 2009 share was the lowest recorded in the eleven year period at 13.7 percent.