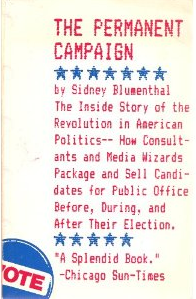 Politico has an article up today that largely rehashes a number of points that have been both here and elsewhere. The basic thrust is that the Citizens United decision — which Politico does not point to, oddly — has led to the proliferation of these “social action” nonprofits, which are required by tax law to spend 50 percent-plus of their funds on non-electoral/political action. This means that these firms, like Crossroads GPS, will wind up running “issue ads” targeting lawmakers over votes and bills, but not calling for their election or defeat.

I’m not sure if this makes the permanent campaign any more permanent, but it certainly means a lot more money will be spent than before. The interesting point made in the Politico piece, previously made at Frum Forum and other places, is that this is all the cause of the McCain-Feingold campaign finance reform. The argument states that McCain-Feingold drove soft money out of the political party system and into the private realm where nonprofits and political action committees picked up the slack. This isn’t wrong, but it also doesn’t factor in that the Citizens United ruling allowed for unlimited political spending by these groups.

There have been a few key consequences of the removal of soft money from the party system and the subsequent Citizens United decision. Money in politics is now less transparent as it has moved from the party system to the private sphere. Parties are less centralized, providing for splintering and decentralized message control. The former is a terrible development and, with the Federal Election Commission looking like a dessicated husk of its former shell and the division over campaign transparency between the parties, looks like it will not be solved any time soon. The latter development was, I think, one of those oft-occurring unintended consequences of process reforms.

Just as the reforms of the sixties and seventies accidentally led to more centralized party control and hyper-partisanship, the major reform of the 2000s led to decentralization. (I shouldn’t discount the Internet’s role here, which has been covered in depth by others.) This decentralization, and the aforementioned decrease in transparency, may wind up being the lasting effect of the reforms (McCain-Feingold) and undoing of previous reforms (Citizens United) during the past decade.