An article published yesterday in Roll Call highlights a new website published by the U.S. Chamber of Commerce—one of Washington’s most powerful players—to help them gain Congressional approval for potential trade pacts. Aside from the new slick way the Chamber intends to influence members of Congress, the article itself mentions people and organizations who take part in the traditional ways of Washington influence. Here’s a look at the influence behind the names mentioned in the piece: 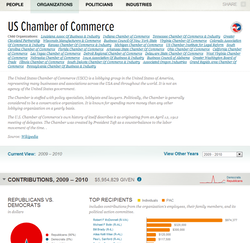 Check out http://influenceexplorer.com/ to learn more about what industries and people benefit from the money given and received.