The phone hacking scandal currently plaguing News Corp owner Rupert Murdoch began in London, and because of rumors that his employees hacked the phone messages of 9/11 victims as well, the scandal has made it’s way to the U.S. where the media mogul has far reaching political interests and is a considered a major political contributor.

In the weeks since it was reported that employees of  News Corp’s tabloid operation, News of the World, may have hacked phone messages belonging to a 13-year-old girl who was abducted and murdered, Murdoch has shutdown the troubled news outlet, he and his son James have appeared before Parliament, one of Murdoch’s key employees resigned ahead of being arrested and the Federal Bureau of Investigations has started an investigation into charges that his employees also hacked the phones of victims of the 9/11 terror attacks. 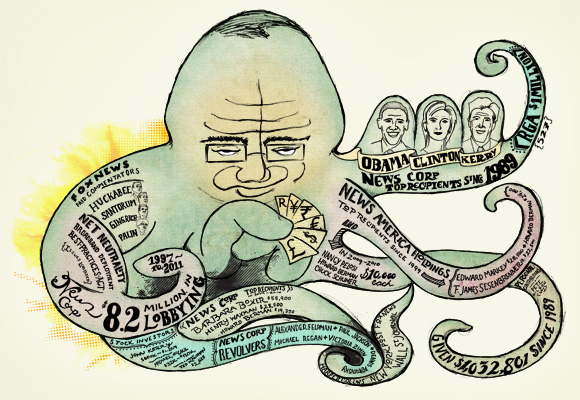 It’s been reported that Murdoch has close, and sometimes inappropriate, relationships with conservative politicians in the U.K. It’s also commonly believed that he has close ties to what we consider conservative politicians here in the U.S. as well, but campaign finance records suggest he has ties to both sides of the aisle.  According to the Sunlight Foundation’s Influence Explorer,  News Corp’s political givings are actually split pretty evenly between Democrats (51 percent) and Republicans (49 percent).

The biggest all-time recipient of contributions from News Corp is President Obama. It should be noted that the totals for  News Corp’s contributions include money from employees of the organization and their family members. Obama being listed as the company’s top recipient might surprise some people because of its highly publicized involvement  with his political rivals, like Sarah Palin who was the vice presidential candidate in 2008 and reportedly still under contract with Murdoch-owned Fox News as a paid commentator.

It’s also been reported that Fox News also has contracts with Newt Gingrich, Rick Santorum and Mike Huckabee, all having run for president either in the past or currently, to appear on the network as commentators. It’s said that these contracts prohibit these three and Sarah Palin from appearing on other networks.

News Corp has made contributions to the Republican Senatorial Leadership Council annually since 2007, with the exception of 2008. Last year, Murdoch’s soft money contribution to the Republican Governor’s Association made news because of its large amount: $1 million. That donation, while commonly known to be true and not denied by Murdoch, can’t be found in IRS or Federal Election Commission records.

Murdoch and his media companies also take advantage of their  powerful position by lobbying Congress on policy issues that affect the business they do. Since 1997, News Corp has spent $8.2 million lobbying highly debated issues such as net neutrality and privacy.

Murdoch’s multiple businesses have also had their share of government revolvers, with a total of five people having worked for the government and News Corp at some point, according to the Center for Responsive Politics. Only one of those people–Paul Jackson–is currently working for Murdoch. He is listed as a lobbyist for the corporation.

Part of News Corp’s corporate profile is the book publisher Harper Collins, who in 1994 offered Newt Gingrich a $4 million book advance. Gingrich declined, reportedly because of political pressure. News Corp also owns the Wall Street Journal  and the New York Post in addition to a number magazines and community news papers. And as the current phone hacking scandal suggests, Rupert Murdoch is a very powerful media force around the world in addition to the UK and Australia. That power seems be threatened now and Murdoch has displayed that by his withdrawal of a bid to take complete control of BSkyB, a major satellite broadcasting corporation based in London. There have also been reports that Murdoch’s control over News Corp might be taken away.

With operations that large and that successful it’s no wonder that rich people like John Kerry, the Democratic Senator from Massachusetts, would have investments in Murdoch empire. Kerry’s investments in News Corp are listed at somewhere between $600,000 and $1.25 million, according to CRP.

News Corp top recipients since 1989, according to Influence Explorer:

News Corp top recipients in 2009-2010 according to Influence Explorer:

Politicians identified as investors in News Corp according to the Center for Responsive Politics: