Last week, a few Sunlighters and I journeyed to Salt Lake City, Utah to do something — er, many things — that we usually don’t do. For one, we definitely don’t walk into swanky hotels (like the Grand America) followed by about 40 people, many of whom are wearing shirts that say — “WE DEMAND #OPENGOV” — and attempt to speak with the governors staying there.

Our trip to the Grand America was driven by you — especially if you’re a reader from the state of Utah. In March, inspired by events in the Beehive State, we wrote an open letter to governors (which you can see here) calling out the trend of governors playing tacit and overt roles in rolling back transparency legislation across the country. We said that, if you signed, we would deliver your letters to the National Governors Association (NGA). Thousands of you responded. 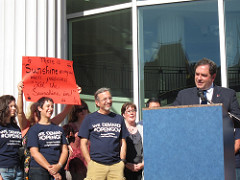 We went to Utah because the NGA went to Utah: July 15th was the first day of the NGA’s annual meeting, which just happened to be hosted in Salt Lake City this year. That same morning, Sunlight, in coordination with a coalition of Utahan open government activists and civic leaders, addressed the NGA in a press conference on the steps of the Scott Matheson Courthouse, a mere two(ish) blocks from the Grand America Hotel, the convention’s location.

The press conference featured statements from Maryann Martindale of the Alliance for a Better Utah, Linda Petersen of the Utah Foundation for Open Government, Sherilyn Benion of the League of Women Voters of Utah, Representative Brian King of Utah State Senate, Sunlight’s own Gabriela Schneider and yours truly. We stood with a crowd of about 50 others as we reviewed not just our “Open Letter to Governors,” asking for the rollbacks of transparency legislation to cease, but also the developments that have happened in Utah. (You can get a picture of how our press conference went down below. To watch the full event, check out the video at the end of this post.)

HB 477. Those letters and numbers may or may not seem familiar to you, but if you live in the state of Utah, they’re infamous. HB 477, aka House Bill 477, is a piece of legislation that nearly derailed Utah’s public information law this past March.

Utahans love their GRAMA — that is, the Government Records Access and Management Act, which HB 477 overturned — and with good reason: GRAMA was the only law in the country that gave public access to state legislature records. (Most freedom of information (FOI) laws don’t apply to the legislative branch; our federal FOI Act, for example, only applies to federal agencies…) It was hailed by journalists and concerned citizens, activists and investigators. And when the state senate moved suddenly to repeal the law, people reacted.

And I don’t just mean they tweeted.

I mean that people got off the couch, out the door and stood outside the state capitol. You’ve heard of the Arab Spring? Well, this was the Utah Spring. Winter Thaw, even. People waking up to the value — the personal value — of open government legislation and taking action. Quang Dang, of SaveGRAMA.org was one of these people. Dang says he had never been active in politics before he became interested in advocating for his public records laws. He had seen how powerful the Internet could be in changing government through the events in the Middle East, and when the HB 477 hit, he felt compelled to act with that knowledge. When I asked him why he was motivated respond to the roll back of transparency laws in his state he looked confused.

“I don’t have a ‘motivation.’ I’m a concerned citizen. This is what I’m supposed to do.”

Citizen action and coordination didn’t just repeal HB 477. It prompted the creation of a bipartisan working group composed of members of new and old media, citizens, lawmakers and staff to review GRAMA and make suggestions for updating the legislation to meet multiple interests — governed and governing alike.

In light of all this, it would be hard to think of a better state in the Union for the NGA to have picked to host its conference this year, at least from the POV of a group of activists looking to make a statement about the popular importance of state-level transparency legislation. Sure, Governor Gary Herbert’s involvement in the transparency rollbacks amounted to little more than pen strokes — one to sign HB 477 into law and one to repeal it — but those pen strokes have immense consequences. And complacency in turning over open government laws is just as bad as pushing for them to be put into place.

Although we organized the press conference, it wasn’t the Sunlight show. In fact, our presence there was to highlight two things: (1) that the open government rollbacks Utah has been fighting for months are not unique to Utah (we’re looking at you, Other 49 Governors of the US of A) and (2) that citizen response to transparency rollbacks aren’t “idle threats.” (We follow through.) The majority of the time was devoted to listening to Utahans speak about the progress that has been made and the work and vigilance required to see that progress through. To learn more about Utah and to get some inspiration for thinking about your home state, I encourage you to listen to their full statements in the video below.

The press conference ended with energy, not anger. Our presence was never meant to be an assault on the governors or the National Governors Association, but rather, an invitation. In the weeks leading up to our trip and the conference, we’d been in contact with the NGA three separate times, requesting information about the schedule (turns out, it’s private!), permission to deliver the open letters and to alert governors to the opportunity to address the crowd. The response was a polite, but firm version of, “No, but have you considered emailing each governor’s office?”

We told you we’d deliver your letters to NGA, so, at the end of the press conference, nearly 10AM on a Friday morning, we took that morning stroll I mentioned earlier. I imagine we were quite the sight for the swarms of security hovering around the entrance of the Grand America: a merry, but calm, band of opengov-ers, strolling right through the front door of the hotel, weaving down the lush hallways to get to the registration table for the NGA meeting. Needless to say, they were not pleased to meet us and did not take the “letters” (USB cards!) that we had in hand. Instead, they asked us to leave.

We did. But we didn’t leave those USB cards behind. We mailed them. It took a few more days than I expected (the perils of wrangling envelopes!), but soon, every governor’s office in the USA will receive a copy of the open letter and the signatures of those who support this petition.

At the podium last Friday, Linda Petersen of the Utah Foundation for Open Government, and well-known leader in the fight against HB 477, declared that in delivering the letter with us, her organization and the individuals and others gathered that day were reiterating the statement that defined the Utahan defense of GRAMA:

“No more. Bring the work out into the sunlight and let us judge for ourselves.”

Keeping public information accessible to the public — free, open and online — is critical to any system of government accountability. The “Open Letter” that we brought with us to Utah and that will soon land on the desks of governor’s (staff) all around the country isn’t a panacea that will ensure that public information remains open from here on. But, signing that letter and demanding the security of our right to know — our free access to information — is a necessary first step in securing greater wins in government transparency. We can’t expect government officials to act in our best interests if we don’t define what we value, how we want to be governed or what legislation we need to be better citizens.

In the few months since we wrote the Open Letter, some states have seen change for the better and new states have had change for the worse. You can read more about these developments here, but that’s not all you can do. You can also call your governor. At http://sunlightfoundation.com/openletter, we’ve made it easy for you to connect with the leader of your state. Take a page from the activists in Utah and realize that by telling your governor that the kind of government you want is one that’s open in practice — not just in promise — you can have an impact.

Stand up for transparency in your state. Tell your governor to stop rolling back transparency and to start thinking bigger.