In 2006 and 2007, at least 12 Riverside, Calif., residents with good credit found a real estate investment that seemed too good to be true. All they had to do was fill out a few forms and in return they could expect to receive checks of up to $50,000. The only problem was, the plan was a sham.

And earlier this year, Riverside county authorities finally caught up with the ploy and arrested Jose Ochoa and others accusing them with grand theft for the purported mortgage fraud. He was accused of misusing information from people with good credit to take out as many as 50 mortgages. And for Ochoa, it was mighty profitable. He made at least $5.4 million renting or selling them, according to the North County Times.

The "investors" didn't know Ochoa's mortgages had been taken out in their names; some even found that Ochoa had signed them up for five mortgages in a single day. And Ochoa did not keep up with the mortgage payments. Eventually, the properties fell in to foreclosure.

Riverside, the southern California county ranked fifth for suspicious mortgage activity in 2011, according to the Financial Crimes Enforcement Network (FinCEN), which is part of the Treasury Department. FinCEN recently released five years of data on reports of mortgage fraud suspicious activity, including the abuses in Riverside. FinCEN collects data on the number of reported mortgage fraud cases in each county across the country and publicly releases aggregate data.

And now Suspicious Activity Reports (SARs) are on the rise again. In the first quarter of 2011, suspicions of mortgage fraud are up 31 percent from the same quarter last year, according to FinCEN. The total SARs reflect the number of people or organizations suspected of making suspicious loans not the number of suspicious loans.

As this map shows, mortgage fraud is far more common than one conman or one county. It's a problem that's been sweeping through the country. 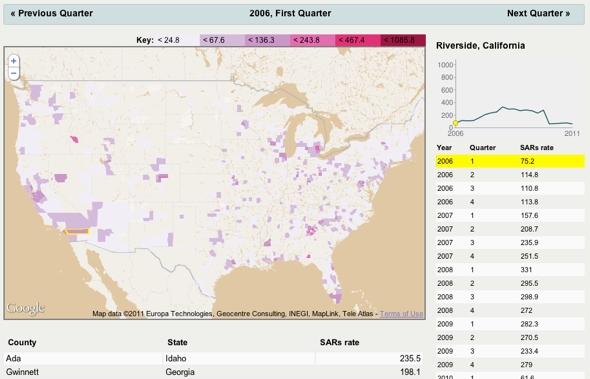 The data have been released because the Treasury Department and local authorities find SAR reports to be useful investigative tools. For example, officials pulled together this list of Bank Security Act Data exposing criminals and winning convictions using this data. In 2006, 100 SARs uncovered a huge mortgage elimination fraud.

Each SAR report is listed in the quarter that the suspicious activity began. As new reports of mortgage fraud emerge, totals for the year of the scam increase.

Suspected mortgage fraud hotspots correlate with places hardest hit by the housing bubble. Large numbers of foreclosures create opportunities for fraud, which in turn can lead to increased foreclosures. Nevada, Florida and California states with the highest foreclosure rates also have the highest rates of suspicious mortgage fraud.

Several counties stood out in our analysis:

Additional information about FinCEN's efforts to stop mortgage fraud can be found here.