The 2012 campaign fundraising totals, covering January through June, proved record in some cases, with the total amount raised by candidates running for Senate being the highest amount ever reported for that time period in a non-election year at $103.1 million, according to an analysis done by the Federal Election Commission released yesterday. 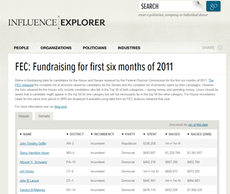 Comparing the data released by the FEC for the House to data released in 2009 shows some significant increases in funding for individual incumbent candidates as well. For instance, the first six months of 2011 House Speaker John Boehner proved fruitful as he brought in $6.4 million. During the same time period in 2009, the amount raised by his campaign was much smaller at just over $1 million.

Majority Leader Eric Cantor has also had an increase in fundraising this year compared to 2009, but it was not nearly as monumental as Boehner’s. Cantor raised $2.6 million in the first six months of this year, about $900,000 more than the same time period in 2009.

The FEC highlighted some significant increases in specific types of campaign fundraising as well. House freshmen incumbents – many originally running on the Tea Party platform — reported raising $32 million through June 30 of this year, 34 percent more than the $9.5 million reported in 2009. The analysis also showed that contributions from individuals to House candidates increased by 21 percent, while contributions from political action committees (PACs) to House candidates increased by just three percent.

Go to the Sunlight Foundation’s Influence Explorer to see some of the data analyzed by the FEC yourself. The FEC’s original press release can be found here.