As the 12 members of the “super committee” scour the nation’s budget searching for at least $1.2 trillion in federal cuts, Washington lobbyists are watching their every move, hoping to protect the interests of their clients.

Some attend fundraisers, ponying up as much as $1,000, $2,000 or $5,000 for face time with a member. Some seek private meetings with members or their staff in Capitol Hill offices. And for some, attending the hearings — being seen while watching the proceedings — is the way to go.

But how do lobbyists get in — much less into front-row seats — when any given day could include multiple hearings, meetings and events? Simple: sometimes they pay someone else to hold their spot in line.

The line for the first organization meeting of the super committee snaked down a long hallway in the House Rayburn building last week, with people lining up just after the building opened at 7:30 a.m. and growing to about 75 people over the next three hours. Among the suit-clad staffers, lobbyists and citizens waiting to attend the 10:30 a.m. public hearing were several people dressed casually: jeans, T-shirts, shorts, biking gear.

Most importantly, they had sheets of paper that mark whose spot they were holding. When it gets close to hearing time, those sheets of paper come out and lobbyists begin to arrive to swap spots with the holders.

These line holders, who’ve spent countless hours in congressional buildings earning somewhere between a reported $10 and $35 an hour, are friendly with staffers, who often greet them by name as they pass by.

They work for companies like Quick Messenger Service. On its site QMS advertises: “just because you want a front row seat for that critical bill mark-up or appropriations committee meeting doesn't mean you or your clients need to lose any sleep. Our professional line-standers will hold your spot for a few hours or a couple of days, whatever you require.”

Reservations can be made on the phone or online, and clients can ask line standers to arrive anywhere from a minimum of two hours early (for a flat rate of about $70) or simply “put us in the front of the line,” no matter how many hours that requires. 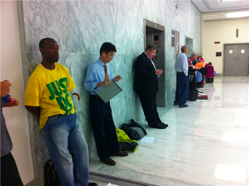 People wait to attend the first meeting of the super committee. The man in the yellow shirt is a lline sitter, and the papers on the ground mark whose spots are being held.

“Some lobbyists or people are interested in being first in line and they’ll say they don’t care what it costs,” said QMC Operations Manager Dave Goldman. He said the company can have as many as 40 to 50 line standers waiting in line for popular hearings. They work as independent contractors.

There’s no maximum number of hours, Goldman said, and in some cases companies or lobby firms have asked standers to simply wait outside of buildings full-time for days in case something pops up; most of the work is congressional hearings, though  Goldman said standers will sometimes pick up museum tickets or do other similar tasks for tourists.

Goldman estimated there’s a “couple dozen” other companies that offer line-standing services in the area.

At this week’s super committee meeting on Tuesday several standers held spots for lobbyists, including another person from the National Association of Chain Drug Stores (NACDS): Marc Schloss, director of government affairs. Schloss claimed his spot before the hearing started and grabbed an end seat in the crowd.

Schloss is lobbying on a number of bills for NACDS, including the Medication Therapy Management Empowerment Act, which will expand the services pharmacies can offer to patients, assisting them with managing their medications (and will also require Medicare to pay for these services). 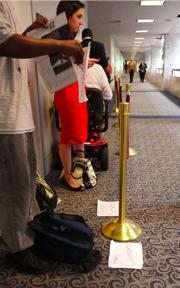 Marc Schloss, whose name is on one of those papers, is director of government affairs for the National Association of Chain Drug Stores.

Back in 2007, then-freshman Sen. Claire McCaskill, D-MO, introduced the "Get In Line Act," which would have banned line sitting at the Capitol.

“I find it troubling that everyone in this room is getting paid by someone,” she said in the Senate Commerce, Science and Transportation Committee hearing room. The Wall Street Journal reported that,"some line-standers had been parked outside the doors since 3 a.m., waiting for seats at a hearing on consumer issues in the wireless industry."

The bill never made it out of committee, and it doesn't appear that the practice will end anytime soon.

(Sunlight's Reporting Group is working to identify who's keeping a close eye on the super committee, so take a look at the photos of the crowd from the first and second meetings and let us know if you can ID any lobbyists or other onlookers.)