Our DC, a SEIU-linked protest group that stopped the first Super Committee meeting, has been regularly delivering a pro-jobs message to congressional Republicans: with some 100 protesters outside House Speaker John Boehner's speech at the Economic Club of Washington yesterday, according to organizers, who said the protest was in support of the American Jobs Act.

Last Tuesday, it organized a protest at the first meeting of the Joint Select Committee on Deficit Reduction, the so-called the Super Committee.

“Jobs! Now!” about 25 unemployed or underemployed protesters shouted outside the room, bringing the meeting to a brief halt. “Jobs! Now!” 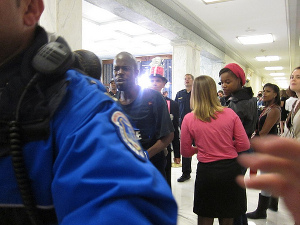 “We wanted the Super Committee to realize America is in pain,” Our DC spokesman James Adams said in a later phone interview.

Earlier this week, the group showed up uninvited to a "Coffee with Cantor" fundraiser benefiting Majority Leader Eric Cantor, R-Va.

According to Adams, Our DC is a loose coalition of concerned groups, formed this spring, united by the need to find good jobs for district residents. The group is in talks with DC Vote for one project, he said, and worked with three social and employment justice groups for another.

In August, the Washington Post first reported on some of the group’s ties. A story about Our DC’s protests at the offices of Rep. Frank Wolf, R-Va., said the group was backed by labor, received seed money from the SEIU and shared an office with the union. Adams confirmed that in a second interview, but said the group had plans to move to a separate office on Martin Luther King Junior Avenue.

On closer inspection, however, the union links go deeper. Kendall Fells, identified by Our DC as an executive director, was listed last year by SEIU’s DC headquarters as an organizing coordinator, drawing an SEIU paycheck, in documents filed with the Labor Department. When this reporter asked for Fells at SEIU Organizing's listed phone number earlier this week, he was transferred to an extension, and after several rings, a recorded message thanked him for calling Our DC. Yesterday within the space of a few hours, “Kendall Fells, OurDC.org,” and “Kendall Fells, SEIU,” sent two separate emails both titled “Call Mayor Gray: Demand Mayor Gray Enforce the Living Wage Law” to a list for Our DC supporters. 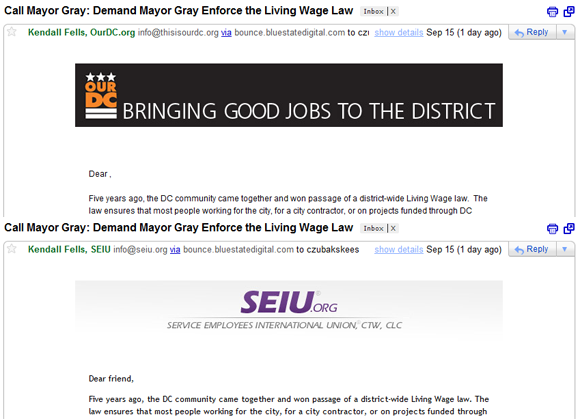 “Kendall works for Our DC,” Adams said when asked about Fells’ current employer.

Other links indicate the closeness of the rest of the group. For example: the HTML source code for Our DC’s website is littered with references to the SEIU (13 refences on the front page); many of the photos on the group’s Flickr account are credited to an SEIU photographer; and the name of an Our DC organizer quoted in The Atlantic’s account of the Super Committee protest, Valerie Bachelor, also shows up in the caption of a photo taken in August by CQ Roll Call: she's identified as an SEIU political assistant, sitting in the union's war room for health care and jobs.

In addition to SEIU Locals 1 and 615, a slew of similar websites share the Our DC website IP address, including Fight for Philly, Good Jobs Great Houston, Minnesotans for a Fair Economy, One Pittsburgh, and Our Future Montgomery. The websites share similar design elements and advocate for similar goals. Several of those groups disclose SEIU as a coalition member, but others say only that labor groups are involved.

The "Call Mayor Gray" campaign illustrates why groups without clear SEIU affiliation could be useful to a union representing service employees, many of whom work in the health care field. The email, introducing an Our DC campaign demanding the city to enforce a law guaranting living wages, cites health care workers as a group effected by lax enforcement.

The SEIU has also been vocal in their efforts to protect Medicare, a possible source of cuts for the Super Committee. And the SEIU has long supported Obama politically, with support for the American Jobs Act another example.

“We had 100 people at the [Boehner speech], the vast majority of them unemployed or under-employed, and that's who we represent,” said Adams in response to the idea that the group represents the SEIU.

On an episode of DC radio program Metro Watch, aired August 8 on WPFW, Fells, the executive director, said his group wants to bring some of the misery of joblessness to congressional Republicans and other members of Congress who weren't telling corporations to pay a fair share of taxes or to give people jobs.

He identified Reps. Robert Aderholt, R-Ala. Hal Rogers, R-Ky., Wolf, and Cantor as Congressmen that had yet to respond to Our DC’s attempts to reach them through their offices, and he outlined a strategy to get through: “When you start having block captains and rapid response members that are every single place that they are? That they can’t get any sleep, because every time they look in the rear view mirror, we’re there? Oh, I think they’re going to get the message.”